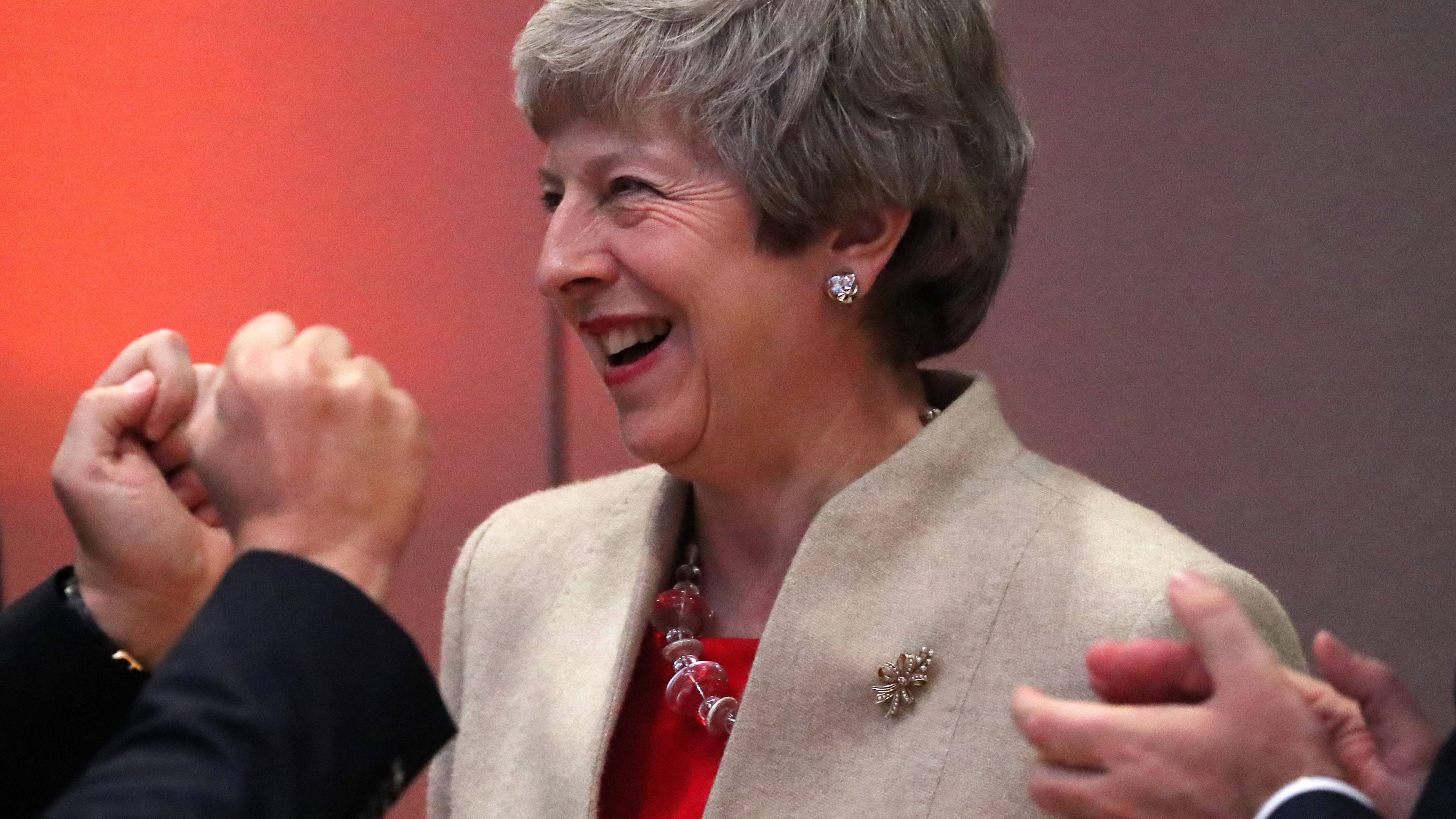 The V4 in a Brexit deadlock

After three years from the brexit referendum, the UK remains in a deadlock. The Withdrawal Agreement between the UK and the EU have been not approved yet by the British Parliament. Meantime the European elections took place in the EU‘s Member States including the UK which is due to leave the EU by 31 October.

The UK is often considered as the one who is responsible for the current deadlock over Brexit, but experts point out that it is difficult to determine one source of those problems.

“The Brexit situation is extremely complex, multi-layered and difficult to navigate. Each side, to a certain extent, might find itself accused of contributing to the current Brexit chaos,” said Czech expert Monika Brusenbauch Meislová from the Department of International Relations and European Studies, Masaryk University in Brno. On the other hand she admitted that it is the mutually incompatible goals set forth by the Prime Minister Theresa May that can be identified as one of the main causes. “In a nutshell, she wants the UK to leave both the single market and customs union whilst simultaneously opposing  a hard border between Northern Ireland and the Republic of Ireland. Essentially, however, these arguments are largely incompatible with each other and almost impossible to reconcile” explained Brusenbauch Meislová.

Different arguments could be heard from Slovakian top-level politicians. After the British Parliament voted down the British prime minister's plan for the second time in mid-March 2019, Slovakia's speaker of parliament, Andrej Danko said it is clear that „the EU has not managed to come up with solution for this over the past two years “. According to him, the Brexit deadlock is a proof that the EU should be reformed. „The absolute inability of EU leaders confirms that the Union should be reformed comprehensively, and MEPs should be replaced,” specified his spokesman Tomáš Kostelník.

Still, Slovakian government officials fully supported the European Commission´s Taskforce on article 50 leaded by chief negotiator Michel Barnier during the whole brexit negotiations process. On several occasion, they also expressed their satisfaction with the Withdrawal agreement. ”The brexit deal is not opened for renegotiation. The negotiated agreement is good as it is and we see no reason to change it,“ Slovakian MFA Miroslav Lajčák commented.

Brexit as an inspiration?

The Hungarian Prime Minister has been trying to profit off Brexit ever since the Brexit referendum, legitimising his own anti-EU, pro-sovereignty rhetoric. Brexit, by taking the British government out of the equation, gave an opportunity to PM Orbán to push Euroscepticism to the East and amplify the pro-sovereignty voice of the V4. Contrary to the claims of the Hungarian PM, Leave did not win the referendum because of the EU’s migration policy but, among others, because Central-Eastern-European workers, yet the Orbán government continues to interpret Brexit in this context. “Jean-Claude Juncker failed as a European leader. He could not keep the British in the bloc, while he could not keep the migrants out of it,” said Hungarian Foreign Minister Péter Szijjártó in April. In this regard, Brexit became a tool of instrumentalization for the Hungarian government.

In the Czech Republic there were voices calling for a similar referendum as the one in the United Kingdom. But the situation looks different now. “This can be attributed, among other things, to the protracted nature of the withdrawal process as well as its enormous complexity, chaos and a large degree of unpredictability. Similar tendencies have been, after all, observed also in other EU member states where, several months after the in/outreferendum, there were many concerns about a potential domino effect and  so-called Frexit, Grexit, Nexit or Swexit. Nowadays, however, one gets an impression that the politicians promoting their country’s exit from the EU have adopted a wait-and-see approach - waiting to see how the Brexit and its impacts will actually play out” said Brusenbauch Meislová.

The only political party in the Czech Parliament which supports a so-called Czexit is the Freedom and Direct Democracy Party. “The party has been obviously inspired by the UK. (...) Its election manifesto evenliterally states ‘Let’s leave the English way’,” the Czech expert added.

Although Poland’s government is in conflict with the European Commission over respecting rule of law and its politicians used to be critical of the EU as well as Hungarian ones, Polexit is a not acceptable option for any major political party, so the process of Brexit did not have any impact on internal debate. Poles are one of the most euro-enthusiastic nations in the EU, so the PiS politicians openly say that the membership in the EU is not in danger. “The membership in the EU is the requirement of Polish patriotism. This does not mean, however, that we accept everything”, said PiS chairman Jaroslaw Kaczynski.

In terms of VIsegrád-British relations, Polish and Hungarian government saw Eurosceptic British government defending national sovereignty as a strategic partner. Economic factors are equally important. For example, Poland and the UK may have been considered allied in the EU arena, particularly in the field of single market, especially when it came to single service market. “Many similarities can be found in the approach to a Single Digital Market or more generally in the thinking of a common market without protectionist barriers. Also, for London and Warsaw alike, the issue of decision-making balance between Eurozone countries and those outside of it has always been important,” claimed Przemysław Biskup, expert of the Polish Institute of International Affairs (PISM). A fear of worsening balance between Eurozone and non-Eurozone members after Brexit is shared among those V4 countries which have not adopted a common European currency yet, i.e. Poland, the Czechia and Hungary, since the UK was the largest defender of non-Eurozone countries.

The chief advisor of the British-Polish Chamber of Commerce Michael Dembinski points out that Great Britain has been one of Poland’s most important economic partners for years. For years, it has also been in the “top three” of the most important markets of Polish exports. Last year, the UK was promoted to second place. “This is due to two reasons. Above all, British exporters were stocking various goods in case of hard Brexit, and secondly – the import of Polish meat decreased in the Czech Republic. And so the British were ahead of the Czechs”, says Dembinski. The first place among export markets for Polish products has been occupied by Germany for years.

As far as economic impacts are concerned, experts agree that negative effects on foreign demand will be most painful for the Slovak economy. Among Visegrad group countries, Slovakia is the most vulnerable to brexit-related trade disruptions. United Kingdom remains one of the key trade partners for Slovakia. Here are some figures: Total export from Slovakia to the UK represents more than five percent of its GDP, while this number is higher. In 2017, Slovakia exported nearly €5 billion worth in goods to the United Kingdom. This means that Britain absorbed 6 percent of total Slovak exports making it the sixth biggest supplier of the Slovak production. None of the remaining Visegrad countries exceeds the Slovak exports in terms of share of GDP. In this respect, only four EU Member States export more to the UK.

Slovakia’s main export products are cars, parts and accessories of motor vehicles, petroleum gasses, gaseous hydrocarbons, monitors, projectors and televisions. An impact of Brexit on the majority of these sectors are shared in the Czechia and Poland as well.

"From Slovakia's point of view as an export-oriented economy, it is necessary to set the best conditions possible for the export of cars," said Maroš Stano, spokesperson for the Economy Ministry.

Although British-Hungarian trade ties are insignificant in themselves, a hard Brexit would certainly affect Hungary’s long-term growth potential seriously. According to Erste Bank, hard Brexit could even set Hungarian economic growth back by two percentage points. Hungary’s exposure to Brexit is mainly the result of the country’s dependence on German exports, which currently make up 15% of British imports. If this fell considerably, Hungarian industry would also lose a part of its markets.

Besides economic relations, Hungary might also be affected through global value chains, and the region could mainly be hit by Brexit through the Eurozone. “More than 75% of Hungarian exports are directed towards other EU regions; Brexit could deteriorate EU growth in the mid-term and thus the external demand for Hungarian industry as well. Any agreement on a customs union would affect this process positively and reduce risks,” political scientist Szabina Maguire, who is the director of the England-based Inspiring Policies, told Political Capital.

Brexit can significantly complicate the activities of Czech firms trading with their counterparts in the UK as well.  “The most affected by Brexit might be firms in the aerospace and automotive industry, medical technology manufactures, electrical engineering, or optical technology manufactures,” explained Eva Veličková from the Confederation of Industry of the Czech Republic. According to her, Brexit can have also an impact on the retail chains and e-shops dependent on the fast movement of goods in both directions. “Most worrying are those companies that are essentially linked to supply chains across the EU as they will also be affected indirectly by, for example, a drop in orders elsewhere in the EU,” Veličková warned.

Canceling the Brexit process is undoubtedly the best scenario for all the V4 countries. Given the fact that this option is highly unlikely, Customs union seems to be the second preferable scenario. Third place goes to comprehensive trade agreement following the example of EU-Canada trade agreement (CETA). According to Ladislav Vaškovič, a chair of the Economic committee of the Slovak Trade and Industry Chamber (SOPK), the most likely outcome of the brexit is a no deal scenario or a free trade deal with zero duties. „Comparing to hard brexit, this second scenario would lead to lower non-tariff costs, and hence, less negative impact on respective sides,“ Vaškovič told EURACTIV.sk.

According to the Kryštof Kruliš, analysts from the Association for International Affairs, Brexit with a deal which was still not approved by the British Parliament would have no negative impact on any sector. “The UK, however, will not be a member of the EU institutions any more. Further situation will depend on the future relations the EU with the UK will be able to negotiate,” Kruliš concluded.