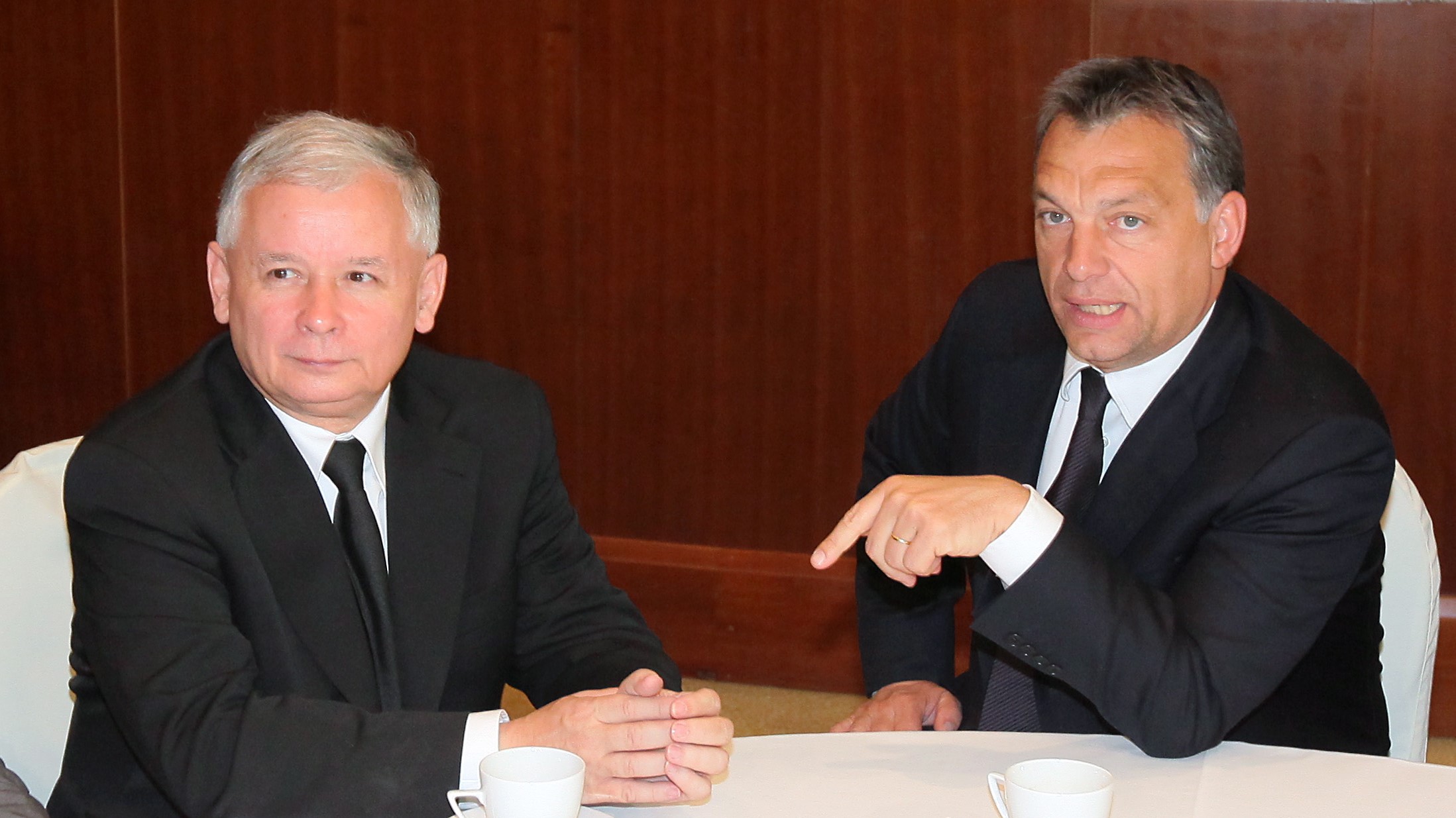 As we approach the European Parliamentary elections, Eurosceptic political rhetoric in Hungary and Poland is once again rising. It is hardly surprising given the critical view the governing parties and their leaders, Viktor Orbán and Jaroslaw Kaczyński share towards the European Union and some of its policies.

As we approach the European Parliamentary (EP) elections, Eurosceptic political rhetoric in Hungary and Poland is once again rising. It is hardly surprising given the critical view the governing parties and their leaders, Viktor Orbán and Jaroslaw Kaczyński share towards the European Union (EU) and some of its policies.

As for Hungary, although the membership of Orbán’s Fidesz party has just recently been suspended in the European People’s Party (EPP), partly because Orbán’s misleading billboard campaign against ‘Brussels’ and its alleged migration plans, this did not stop the Prime Minister from being ever more vocal about his criticism on the EU. While Orbán often underscores the fact that Hungarians support the EU integration process overwhelmingly, over the years he has developed a strong Eurosceptic, populist narrative. It is Eurosceptic inasmuch as it questions the institutional trajectory of ever deeper integration, and disputes common EU policies, especially in the field of asylum and migration. While criticism could be constructive, it is the populist element in Orbán’s discourse which makes it potentially destructive for the EU. Simply put, he increasingly equates the EU with ‘the corrupt elite’ and contrasts it with ‘the pure people’ of Hungary whom he, and only he and his government can truly represent.

The antagonism between the corrupt EU elite and the honest Hungarians progressively mirrors a nationalist, anti-imperialist struggle between the Hungarian nation and ‘Brussels’. Back in 2011, at the time the new constitution was adopted in Hungary, Orbán has already opposed “the unwanted help of foreigners” trying to dictate the government, much like the Soviets did after WWII. In 2014, he likened the EU to “empire bureaucrats” that acted against the will of the people which culminated in his 2018 claim that ‘Brussels’ was trying “to replace an alliance of free nations with a European empire”. This narrative was not changed or toned down after the suspension of his party, as during his regular Sunday morning Radio interview the following weekend, Orbán claimed that “Hungarians, and not parties leaning to the left or civil society organizations financed by George Soros in Brussels will decide what happens in Hungary”. He insisted anew that a bureaucratic elite in Brussels, that lives in a bubble and has lost touch with reality, harbors colonialist sentiments towards Central European countries, and wants to force their ideas about migration onto the Hungarian people.

Orbán’s Eurosceptic, populist narrative has become increasingly one-dimensional. While criticism against his government has been multifaceted and concentrate on the questions of rule of law and democracy, he merges his critics into one pro-migration, federalist group. This is a direct derivative of his populist narrative that requires a united elite against which he can represent ‘the people’. This is unlikely to change in the runup to the EP elections and depending on the results it could even intensify afterwards.

In Poland, even though Kaczyński holds no position in the government, he is considered to be the de facto leader of the country. Similar to Orbán, over the years he has developed a Eurosceptic, populist narrative, which resembles the tone stroked by the Hungarian Prime Minister. As rule of law-based criticism intensified, Kaczyński started to link the domestic, corrupt elite with that of the EU, insisting already in 2015 that he would not let the EU indicate “what path we should take”. Later, he likened the EU to a colonizing power that charged an attack against the Polish people. The migration crisis allowed him to contrast Poland with the EU more clearly and he increasingly emphasized identity and values in his Eurosceptic discourse. In fact, he often depicts Western European countries that dominate the EU as being immoral given their exploitative, colonialist past. Just recently, he announced another cultural counter-revolution against the EU that is not able to defend traditional family values as it continuously insists on political correctness for the sake of LGBTQ and Muslim minorities.

Although Kaczyński and Orbán are often likened by political commentators, their Eurosceptic populism show important differences.

First, Orbán’s narrative is much more outspoken and pointed, which is partly due to the level of political centralization in the country. Kaczyński is part of a multiplayer political arena that is shared with distinct members of the cabinet such as the Prime Minister or the Minister for Foreign Affairs who often serve as ‘good cops’ at EU-level exchanges. While Orbán’s bluntness was until now swept under the carpet by the EPP, Kaczyński’s party did not enjoy the same protection at the European level, which is likely to have been contributed to the party leader’s more moderate tone.

Secondly, ‘Brussels’ is equally depicted to collaborate with the domestic opposition, although this is more prominent in Poland given the party system structure and the role of the governing party in it. Thirdly, while the imperialist account of the EU, and a pro-sovereigntist approach are notable in both countries, Orbán channels his Euroscepticism through a pro-, vs. anti-migration discourse in contrast to Kaczyński who criticizes the EU more in the context of its debate about the alleged deterioration of the rule of law in Poland. Also, while the Hungarian Prime Minister claims that every rule of law based criticism against his government is an attempt to condemn Hungary due to its harsh anti-immigrant stance, such a fusion of discourses is not so obvious in Poland.

Despite these differences, Orbán still emphasizes the Eurosceptic link between Hungary and Poland: “When Poland is attacked from Brussels, the attack is against the whole of central Europe, and against us Hungarians. To empire builders who seek to cast their shadow over central Europe, we have this to say: they will always need to reckon with the strong bonds between Poland and Hungary”. How far this link can and will be exploited after the EP elections is yet to be seen. However, a potential ousting or exit from the EPP might have an impact on Orbán’s Eurosceptic populist narrative, as he has been deepening the East-West divide even from within the EPP.

Robert Csehi is a political scientist, and a lecturer at the Bavarian School of Public Policy at the Technical University Munich

Edit Zgut is a political scientist and a guest lecturer at the Center for Europe, University of Warsaw