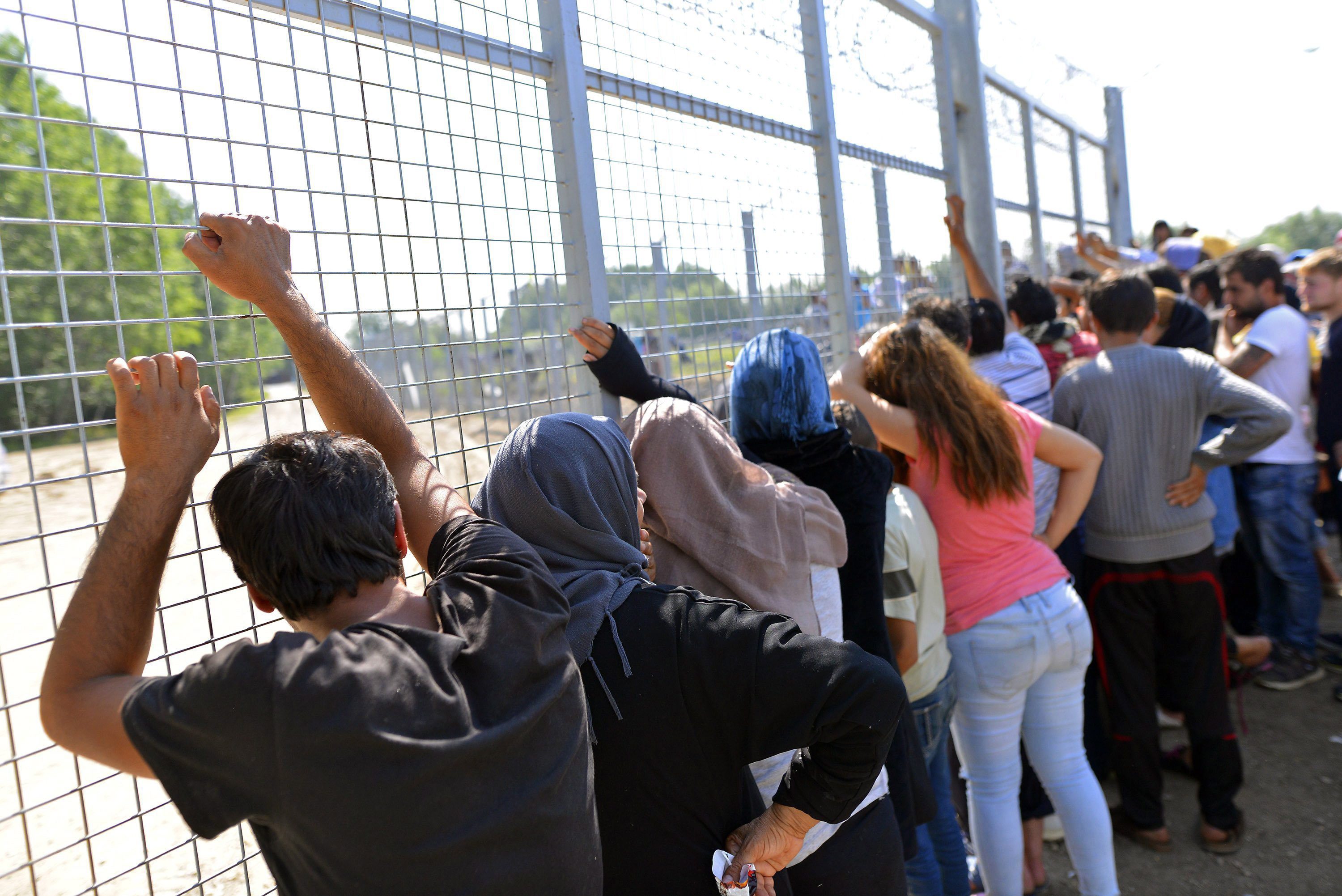 Viktor Orbán’s government has gone further. It erected a 175-kilometre fence on the Serbian border at the start of the refugee crisis in 2015 and then organised an anti-quota referendum in 2016.

Whatever the reasons behind, all V4 states were far from meeting the EU quotas. As a result, Czech Republic, Hungary and Poland were referred to the Court of Justice of the EU (CJEU) together for “non-compliance with their legal obligations” on relocation. Commission didn’t file a lawsuit against Slovakia because of those 16 relocated persons, as it decided to proceed with those states that have not relocated anyone, or have not pledged for almost a year. Slovakia managed to slip.

All the V4 countries highlight in their national and European discourse the need to protect their national sovereignty that the EU tries to infringe on via compulsory quotas. And three out of the four nations – Czechs standing apart – have demonstrated how they are virtuous voluntarily.

Hungary hasn’t allowed a person as a part of the EU scheme. However, Fidesz government admitted that it had granted international protection to around 1300 asylum-seekers (reminder: it was supposed to admit 1291 within EU relocations) last year, most of whom moved on westwards. In the first four months of 2018, 267 asylum-seekers were granted protection, while 326 applications were rejected.

According to former Polish Prime Minister Beata Szydło and the present one, Mateusz Morawiecki, the country has admitted over a million Ukrainian refugees (the latter mentioned even 1,5 million) that escaped due to the war in Donbas and the annexation of Crimea. The data from the Office for Foreigners (UDSC) don’t confirm this information. “Currently 3.4 thousand foreigners have valid residency permits (karta pobytu) due to the granted international protection (pomoc międzynarodowa). Additionally, around 2.3 thousand have residency permits due to the granted national protection (ochrona krajowa),” the Office’s spokesman Jakub Dudziak told EURACTIV.pl. So less than six thousand altogether. Over 90% of applications are filed by former Soviet Union citizens, especially from Russia (mostly Chechen and Ingush), Ukraine, Tajikistan, Armenia, and Georgia. Few applications are accepted – annually some 300-500. Up to three thousand are rejected and three fourths are remitted meaning that applicants have left Poland before a decision was issued. Most often they head West. Today, Ukrainians indeed make up for most foreigners in Poland. There are 155 thousand of them among 340 thousand foreign residents in general. The major ground for their stay is work or education.

Slovakia has always emphasized it has accepted its 16 refugees not within the compulsory scheme but on the voluntary basis. It has also pledged to resettle 100 people under the voluntary resettlement system which hasn’t happened. But it did resettle 145 Assyrian Christians from Iraq in December 2015. Voluntarily of course – and this time indeed not as part of the EU scheme.

In December 2015, Bratislava and (later also) Budapest filed a lawsuit against the decision of the EU Council against the provisional mechanism for the mandatory relocation of asylum seekers. The Court of Justice dismissed the case in its entirety in September 2017. Czech Republic and Poland didn’t formally join in filing a lawsuit but politically supported both countries throughout the legal action.

No countries for refugees

Again, numbers will be helpful in illustrating the views of Czechs, Hungarians, Polish and Slovaks. In all four states, majorities oppose admitting refugees. 58% Czechs think that their country should not accept refugees (Public Opinion Research Centre, April 2018). In Hungary, it’s not only about not accepting refugees, it’s about not admitting them under any circumstances: almost half of Hungarians (48%) said there were no arguments that would convince them to welcome immigrants to the country (Vera Messing’s and Bence Ságvári’s research for Friedrich Ebert Stiftung, March 2018). In comparison, this proportion was only 13% in Poland, where the sentiment towards refugees is, however, also overwhelmingly unenthusiastic. 63% of Poles surveyed don’t want to admit „people that fled from countries involved in military conflicts”. 33% of surveyed do (Public Opinion Research Center, December 2017). Slovakia is less open to migrants than both Czechia and Poland, only overtaken by… Hungary (Gallup, August 2017).

Feeding in on that sentiment Hungarian government proposed this January the so-called Stop Soros legislative package that would restrict the activities of civil society organisations financed from abroad and dealing with migration. Penal Code has recently approved an article that says about “organising illegal migration”. According to the Hungarian Helsinki Committee’s co-chair Márta Pardavi this legal package turns a political campaign pamphlet and a political goal into law. In her view, penalizing humanitarian and legal aid with imprisonment is unacceptable in a democratic country.

Two indices show that politicians at least partly influence voters’ opinions. As mentioned above, now some 63% of Poles oppose admitting migrants. The situation was opposite three years ago, before the ruling Law and Justice (PiS) party have come into power in October 2015 after anti-refugee electoral campaign. Refugees might bring to Europe “various parasites, protozoans that are not a threat for those people’s bodies but might pose a threat here” – so goes the famous sentence by PiS leader Jarosław Kaczyński pronounced two weeks before elections. In May 2015, just 21% of Poles were against accepting refugees, 62% were in favour. At the end of that same year, Polish sentiments were turned upside down.

What has changed is people’s perception of a “refugee“. Polls show that people often lack awareness who an asylum seeker is, in the first place. Now a typical connotation for an asylum seeker or a refugee is a Muslim and the typical context is a threat. So, the origin of a refugee is very important. For example, 75% of Poles surveyed are against accepting refugees from Middle East or Africa, while only 32% don’t want refugees from Eastern Ukraine.

The definition of solidarity

What are the V4 solutions for the migration crisis and the potential future ones? First and foremost, they all underline the need to tackle the root causes of migration. Probably, all asylum seekers and refugees would agree.

When it comes to migrations already taking place, V4 countries offer a compromise concept of “flexible”, later changed into “effective solidarity”, promoted during Slovakia’s EU Council presidency in the second half of 2016. It has not found much support at the time. Its most vocal critic was European Parliament’s rapporteur for the file, Cecilia Wikström: „Flexible solidarity? This is a stupidity beyond all imagination, she said in June 2017.”

Poland’s EU affairs Minister Konrad Szymański said (also in June 2017) that “Member States should be free to choose instruments to demonstrate European solidarity”. “Based on the practice and experience we consider them [compulsory quotas] an ineffective tool that incites secondary movements and acts as a pull factor,” says the Ministry of Interior of the Slovak Republic. But any compulsory redistribution mechanism is a no-go for all V4 states.

Still, all four governments support reforming the present asylum system, while opposing automatism and any new supranational solutions. They argue decisions concerning EU asylum reform should be taken on the level of the European Council and not at ministerial meetings, so that there’s a veto possibility.

Last June, Konrad Szymański reminded that Poland unvaryingly opposes “any projects of supranational migration management”, highlighting that nevertheless “in the context of the refugee crisis Poland offers its participation in almost all European activities”. “We have strengthened Frontex, supported the EU-Turkey deal, we engage financially and technically on external borders. We are ready to develop this type of engagement,” said the Polish Minister.

Focus on root causes and borders

The V4 countries concentrate on two major action instruments. According to Czech Prime Minister Andrej Babiš, the first one is assistance “in the place of origin of migration and on migratory routes, in the Middle East, the Balkans, North Africa or Sahel”. The second instrument is improving the protection of external borders. “Frontex and the EU must be active outside Europe,” said Babiš. Creating external hotspots out of the EU’s territory is a popular idea. And not only in Visegrad. It could be acceptable compromise for the whole EU, said Martin Hrabálek, expert on migration from Mendel University in Brno.

This opinion was reflected in the June European Summit conclusions mentioning “disembarkation platforms” outside Europe for migrants rescued at sea. They are generally satisfactory for the Visegrad Group. But first and foremost, European Council agreed that relocations will take place based on a voluntary basis, which is effectively the end of the mandatory quotas. Another V4 argument – that of strengthening external EU borders and developing Frontex capabilities and mandate – also appeared in the conclusions. And even though “the need to reform the Dublin Regulation was not resolved”, at least this “reform (…) will not be adopted by a majority voting procedure” – Jolanta Szymańska from the Polish Institute of Internal Affairs comments.

The V4 countries have indeed managed to pull the EU towards their “flexible” version of solidarity. They wouldn’t bend to any compromises on this matter, either under threat of sanctions, CJEU procedures, nor limited funds.

Politicians have worked hard for both anti-refugee and anti-EU sentiments among V4 citizens. No wonder that after the constant paraphrasing of the axiom that EU migration policy is “a ritual suicide”, as the former Slovak Prime Minister Robert Fico put it in January 2016, their efforts are now bearing political fruit.

Although the migration crisis did not hit any V4 country at all, migration has started to be considered a security issue which makes any debate on the topic very emotional. According to the migration policy expert professor Witold Klaus from the Polish Academy of Sciences and Warsaw University’s Centre of Migration Research, the EU asylum reform should be founded on changing the paradigm of perceiving a refugee. „We should come back to looking at these people in the humanitarian context” – he told EURACTIV.pl.