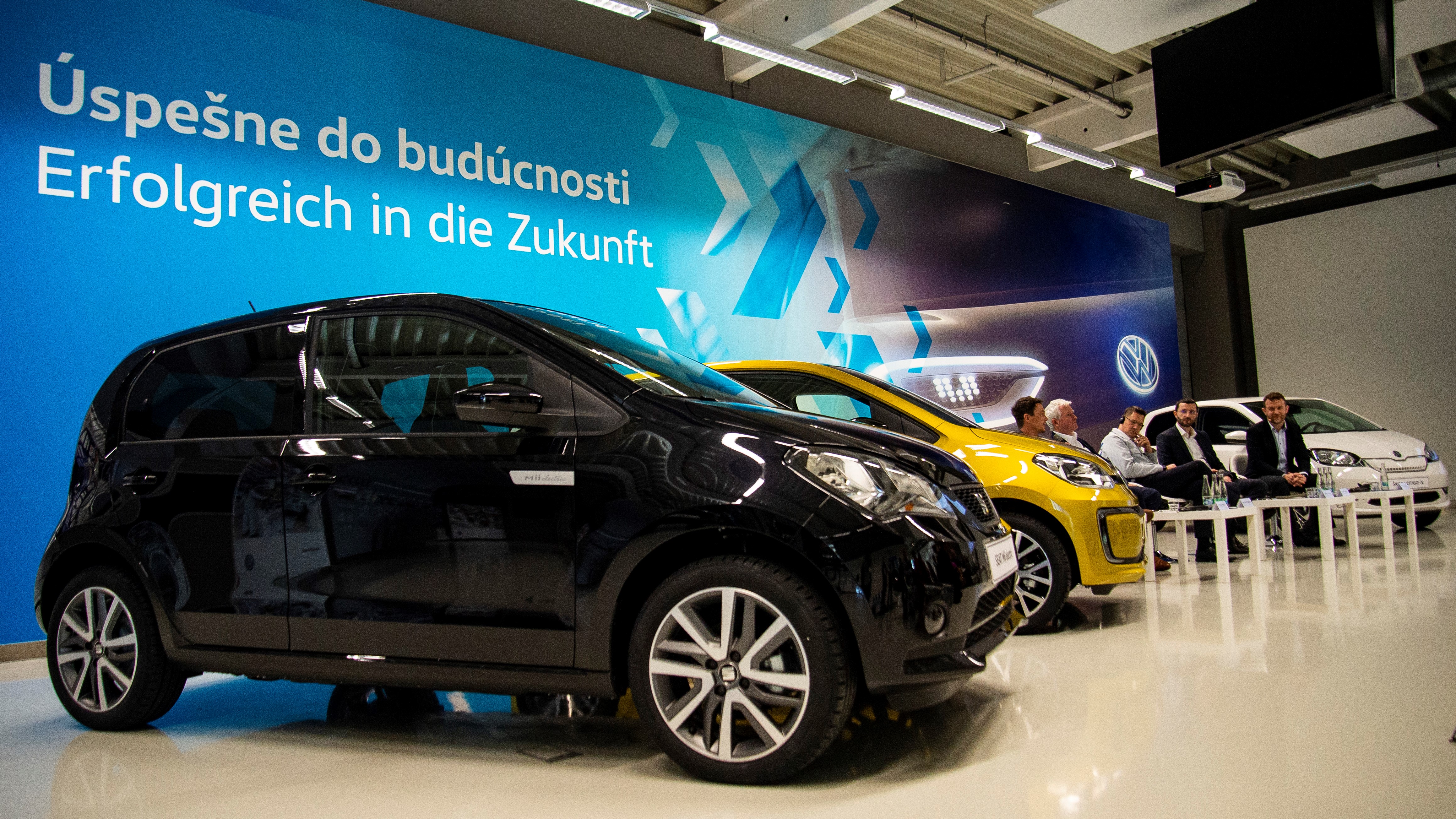 Slovakia struggles to be on top of the changes the automotive sector is undergoing, including the green and digital transformation. While Slovakia scores in car production output, in innovation it lacks behind its Visegrad neighbours.

If there is an global economic ranking where Slovakia repeatedly occupies the first place, it’s the car production per capita. The sector accounts for 13 % of Slovakia´s GDP, almost 50 % of the industrial production and 46 % of the exports. According to Automotive Industry Association of the Slovak Republic, the sector gives work to 177 000 thousand people, with further tens of thousands jobs secondary linked to the sector.

Currently, Slovakia is home to manufacturing plats of Volkswagen (Bratislava), Kia (Žilina), PSA Peugeot Citroën (Trnava) and Jaguar Range Rover (Nitra) as the last addition since 2018. In 2019, more than one million cars were produced by these manufacturers in a country of 5,5 million people, bringing it to 202 cars per 1000 inhabitants.

While these are all impressive numbers and the sector has been the driver for the Slovak economy for a very long time, necessarily there are downsides. Among them is the country´s vulnerability stemming from the reliance on the sector and limited possibilities of national policies on the decisions and fitness of multinational companies or global markets.

This is a fate of small countries, says Vladimír Baláž from the Prognostic Institute of the Slovak Academy of Sciences. Smaller countries will always be vulnerable, especially those oriented on export, such as Slovakia. While, the dependency is a fact of life, the character of the dependency is more important. In this sense, cars are better than, say, tourism, Baláž believes. “The car is a complex product that is will always be in demand globally. Also, there are lot of subcontractors and secondary sectors liked to it,” the economist adds.

“While construction part of the job may transfer elsewhere, the more sophisticated part of the production will stay,” says Baláž.

The good kind of dependency?

Due to progressing digitalisation and adoption of the green deal, the car producing industry is undergoing the biggest transformation ever. The pandemic, has made all of these challenges even sharper and added some new ones. All of this combined has the potential to change the transformation into disruption. This makes the need to stay on top of the developments for Slovakia all the more pressing.

According to the 2019 OECD Economic Survey for Slovakia the benefits of the development strategy based on export-led manufacturing industry have started to diminished already since the 2008-09 crisis and the subsequent slowdown in world trade growth.

Moreover, Slovakia’s integration into world trade has remained “for a large part based on downstream activities of value chains that incorporate little domestic value added, such as the assembly of imported intermediate goods. Further expansion of this growth model is hindered by employers’ increasing difficulties in finding skilled labour,” the report reads.

It recommends more effort to help local firms to better benefit from foreign companies’ know-how, further prepare the workforce for the increasing digitalisation and automation of most industries, promote the diversification of the economy and, in particular, strengthen the role of the services sector.

Lacking labour force now and in the future

The projections of increased needs for filling more sophisticated job vacancies to embrace digitalisation and automatization rather than construction, makes the challenge of skilled work more pronounced that it already is. For some time already, the industry is raising alarm on the notoriously low numbers of students in technical fields. The reform of the education has long been called for, discussed, but has yet to materialize.

So far, the middle and low-skilled jobs in construction are still there. The automotive sector has struggled to find sufficient labour force despite above the average salaries. Although some adjustments have been made, such as the revival of the so called dual education system, that incorporates vocational training, they are hardly a the panacea. More and more foreign workers, especially from Serbia are filling some blanks. Car producers found themselves negotiating special exemptions with the authorities in the otherwise strict Slovak immigration policies. Firms face additional costs to train their employees.

The pandemic hit the automotive and supply industries at a time when they are heavily investing in the green transformation. Sales of vehicles have fallen by 32 percent this year in Europe, leading to massive job cuts in automotive regions. Threats to employment have pushed Slovak government to introduce, for the first time, the so-called Kurzarbeit scheme, something Volkswagen and other employers, have been calling for for a long time. The temporary Kurzarbeit, part of the pandemic “first aid” financed with the EU money (EU SURE), should de replaced by the permanent scheme since 2022.

Reacting to the emission standards, most of the Slovak large producers have announced their transition strategies towards sustainable development in order to minimize the negative impact of the environment and cut the energy consumption, says József Berényi, Vice-Chairman of Trnava Self Governing Region, home to PSA Peugeot Citroën plant.

“Pandemic brought the market to halt. Producers cut costs, investments and do the best to keep the employees on board. EU ambition of emission reductions now seems much less realistic. Testing of new technologies cannot happen as rapidly as originally planned,” Berényi added.

Emission targets push carmakers into electromobility. So far, Slovakia lacks behind the world ratio of electric vehicles production, but the prospect are more optimistic after 2024, Slovak Battery Alliance (member of the European Battery Alliance) says.

This interest organisation and industry cluster tries to put Slovakia on the European map in the development and possibly also production of batteries, to satisfy the expected growing demand.

Slovak Ministry of Economy is trying to get several sustainable transport projects into the EU lists of Important Projects of Common European Interest. Slovak firms have tabled 5 project in the area of batteries. Should a project be included in the list, this makes it eligible for a higher state aid.

„Slovakia needs to find a small segment where it can be elite,“ said the general director of the competitiveness section at the Ministry of Economy Tomáš Kakula at the EURACTIV.sk event on the transformation of the automotive industry.

Support for innovation, start-ups and industry clusters and for the transfer of know-how are key, says analysts Monika Martišková from Central European Labour Studies Institute (CELSI) and adds that “this is a first precondition to be able to keep certain function of the sector in Slovakia.” She is one of the authors of the study “The future of the employment in car sector”.

Slovakia only ranks 21st in European Innovation Scoreboard. The export efficiency of the automotive sector pushes up the Slovak indicator of impact of innovation on profits and employment. Despite the fact, that private R&D has doubled over the last 10 years, again thanks to the automotive industry, Slovakia still lacks behind its European partners in private R&D expenditure.

“Nine years ago Slovak enterprises in the automotive sector invested 19 million euro in R&D. In 2018 it was 118 million, which is a substantial increase,” notes Vladimír Baláž from the Prognostic Institute.

However, the comparison with the neighbours provides a useful point of reference.

“In Czechia private sector invests more than 400 million, which is far more even when you consider the size of the country,” explains Baláž. Hungary for its part, produces far less cars than Slovakia, but has double the expenditure on R&D.

Automotive accounts for on third of private research in Slovakia. This gives a base to build on but it is still considerably weaker position than Czech Republic or Hungary which both host larger development centres. Volkswagen chose Mladá Boleslav in Czechia as one of its e-mobility sites. BMW plans to produce electric vehicles in its Hungarian plant in Debrecen.