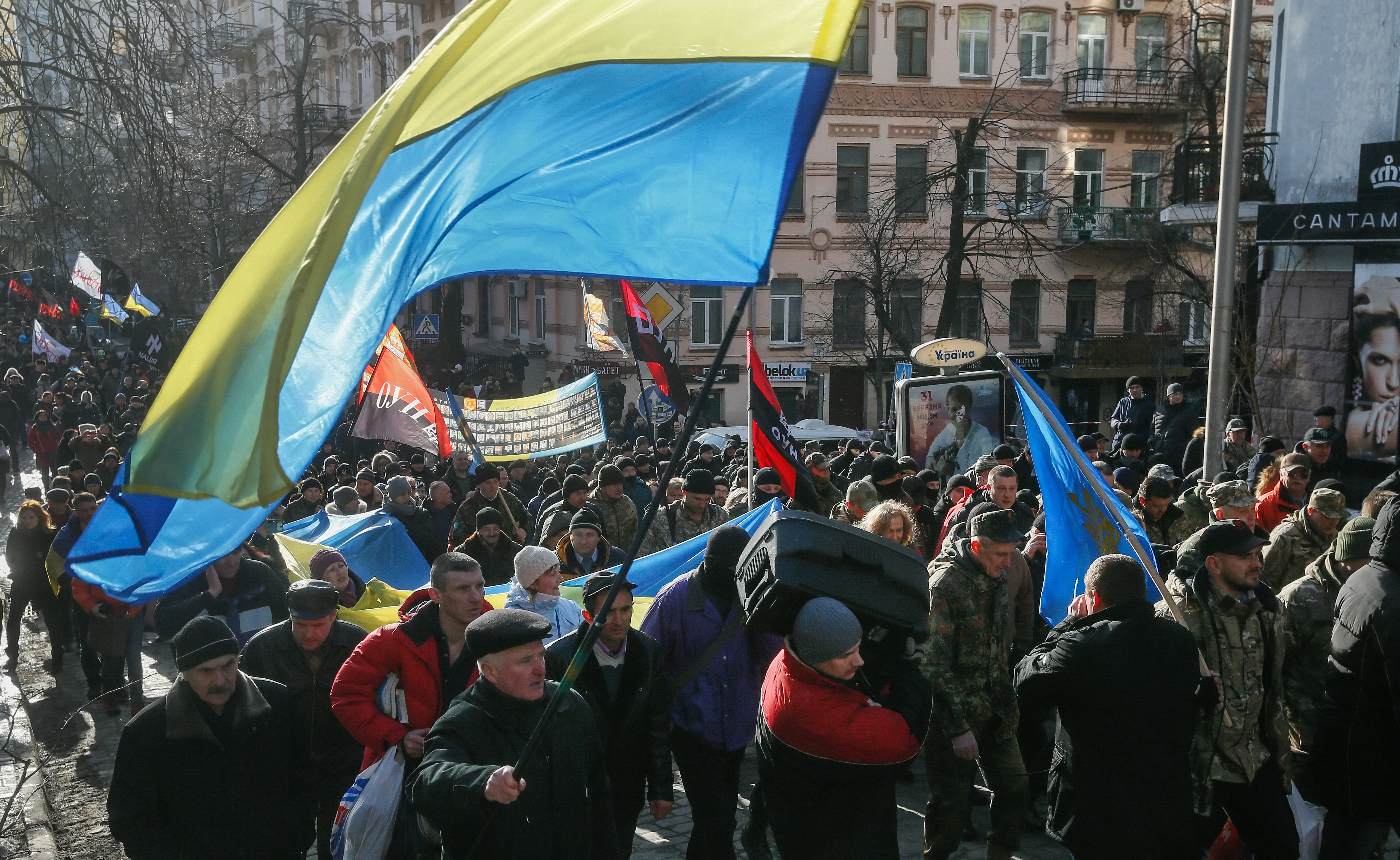 The fact that Poland, the Czech Republic or Hungary are moving away from the EU, pushing themselves to its margin, is of great importance to Ukraine. After all, Kyiv would like to be as close to the united Europe as possible – Kateryna Zarembo, deputy director at the New Europe Centre tells EURACTIV.pl.

The fact that Poland, the Czech Republic or Hungary are moving away from the EU, pushing themselves to its margin, is of great importance to Ukraine. After all, Kyiv would like to be as close to the united Europe as possible – Kateryna Zarembo, deputy director at the New Europe Centre tells EURACTIV.pl.

Is the Visegrad Group perceived in Ukraine as an important partner?

Simultaneously, each of the Visegrad Group countries has different priorities in relations with Ukraine. Unfortunately, recently relations between Ukraine and Poland or Hungary have deteriorated considerably.

Why did this happen? Even in the previous decade, and especially after the Orange Revolution, it seemed that the countries of the Visegrad Group would be close to Ukraine.

I think there are many reasons. First of all, we have seen political changes in the Visegrad countries in recent years. Viktor Orban in Hungary increasingly emphasizes national issues, and in this context also disputes with Ukraine. In Poland, since the right-wing Law and Justice (PiS) party took power, also national affairs are more strongly accented. In the meantime [in 2013], also Czech Republic chose a pro-Russian president. And so, the views of the Visegrad countries regarding the relations with Ukraine have changed.

Secondly, in each of these countries there is a different agenda for bilateral relations with Ukraine, while especially with Poland and Hungary the agenda is loaded with conflictual issues. Long-term solutions and systematic dialogue are needed here. This will not be settled on one, even very successful, summit. I am referring to issues related to history or to historical memory, which now play a significant role in Ukrainian-Polish relations or issues of the new Ukrainian educational law and national minorities in Ukrainian-Hungarian relations.

And how about the relations with Russia? How important is this factor? The countries of the Visegrad Group are approaching these relations differently. Poland is a country that has badly assessed Russia's actions over the last twenty years. Hungary, on the other hand, is getting closer and closer to Russia and Budapest is talking loudly about the need to abolish EU sanctions. You have mentioned also the pro-Russian stance of Czech president. And Slovakia is somewhere between Poland and Hungary on this issue.

Of course, relations with Russia are very important. Ukraine evaluates its foreign relations, at least those in the Euro-Atlantic area, also regarding the relations between foreign partners and Russia. Ukraine is now looking at the international arena for friends, allies and partners who will support Kiev in withstanding the Russian aggression and uphold the EU unity towards sanctions against Russia. So, relations of a given country with Russia are a very important factor.

Poland is a special case here. On the one hand, it is strongly anti-Russian, but regarding Ukraine, the conservative ideology of the current Polish authorities is actually convenient for Russia as it coincides with the Russian traditional world-view.

Ukraine no longer finds in V4 the feeling that we are all sceptical about Russia's policy. Kyiv no longer sees the Visegrad Group - as it was in the first decade of the 21st century - as warriors who will conflict with Russia in the name of principles. Instead, Hungary, Slovakia or the Czech Republic prefer to put up with Russia. And this also affects the perception of the Visegrad Group. But this is not the only important issue.

Being anti-Russian, after all, does not necessarily mean being pro-Ukrainian. Especially, if you are also anti-European. Anti-Europeanism is in fact anti-Ukrainian. If the authorities of a country or its elite are anti-European, this does not mean anything good for Ukraine.

Is the transformation model of the Visegrad countries still attractive for Ukraine? In the past Ukraine was emphasizing the willingness to benefit from the experience of Poland, the Czech Republic, Slovakia or Hungary. Not anymore?

It is true that it has changed. But it depends from which perspective you are looking. In the ‘expert circles’, the illiberal tendencies in the countries of Central and Eastern Europe are observed with apprehension. And the fact that Poland, the Czech Republic or Hungary are moving away from the EU, pushing themselves to its margin, is of great importance to Ukraine.

After all, Kyiv would like to be as close to the united Europe as possible. Democracy, the rule of law or pro-Europeanism are values ​​that have gained a lot of importance in Ukraine. But from the point of view of ordinary citizens, Central and Eastern Europe is still a very attractive model, especially in the economic sense.

Ukrainians see how Poland has changed over the last twenty years, how it has evolved becoming a strong economy. From the point of view of welfare Visegrad countries remain very attractive.

Do you also mean those Ukrainians coming to work to Poland? In recent years, this is a mass phenomenon. And their impact on the Polish economy is very positive. Many Ukrainians fill in the gaps in the labour market after Poles that emigrated to Western Europe. But there is still a big lack of workforce in many sectors, also in other Visegrad countries. Maybe the economic reality will make Ukraine and the V4 group come closer again?

Figures show that many Ukrainians go to work in the EU. Poland issued over one million of work permits for Ukrainian citizens in 2017. Which, by the way, does not mean that all these people actually went to Poland or have stayed there, because obtaining a permit does not mean using it or residing in Poland permanently.

Anyway, data also shows that the impact of this situation on the Polish economy is indeed very positive: Polish newspaper Dziennik Gazeta Prawna published a rating of the most influential people for the Polish economy – and Ukrainians are listed collectively in the second position, just behind the country’s Prime Minister and one place ahead of Polish President Andrzej Duda.

However, unfortunately, it all coincides with tendencies of aversion and tensions to Ukrainians. Some Ukrainian people are afraid of prejudice, they are afraid to speak Ukrainian loudly on the street. Their presence in Poland has a positive impact on the Polish economy, but so far it does not improve their perception or the way they are treated.

In which areas – in your opinion – there is the biggest potential for V4-Ukraine cooperation now?

This is an important question. We – analysts and experts – are looking for such fields of cooperation. Certainly, one of them is security and building resilience against hybrid threats.

The economy is certainly a good area for cooperation as well. And economic issues are key to the minds and hearts of people both in the East and in the West. The economic reputation of Ukraine in the West is not good, we want to change it, show its potential. The Visegrad Group as an economic partner could help us.

Another important topic is the Nord Stream 2 gas pipeline. It threatens the entire region. We understand that the work on it has already advanced, but we still need to show together how dangerous this investment is.

And finally - last but not least - there is something that in my opinion is a task not only for governments but also for the opposition and the whole society in general. Now, as the whole European project is in flux, we must promote democratic values, the rule of law and the pragmatic benefits of European integration, including in the Visegrad Four. If this is not the case, then there will be no European integration for Ukraine. As we can see, people all around the world still need to be persuaded to believe in democracy, and its advantages still need to be justified.