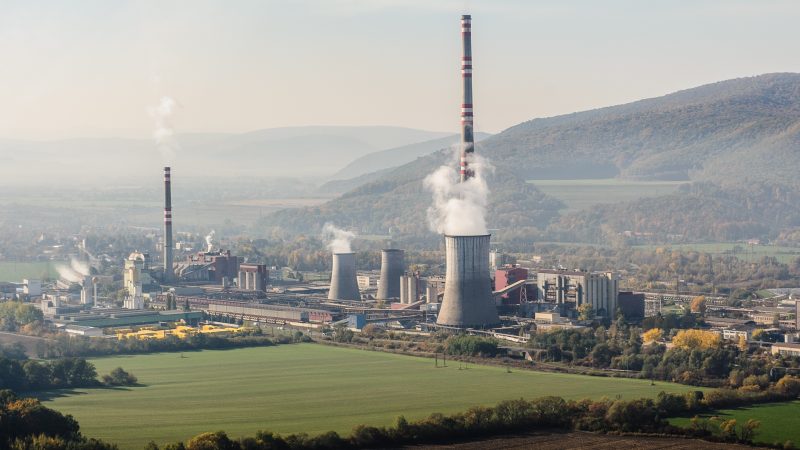 Mega infrastructure projects win over clean energy in the V4

In Visegrad countries, decision makers prefer their historical favourites – coal and nuclear – to renewable sources and energy efficiency. The EU is now the only active and forceful agent that could help the situation, writes Ada Ámon.

In Visegrad countries, decision makers prefer their historical favourites – coal and nuclear – to renewable sources and energy efficiency. The EU is now the only active and forceful agent that could help the situation, writes Ada Ámon.

The Visegrad Group plays a significant role in setting the agenda for the rest of Central Eastern European (CEE) Member States, therefore it is interesting to see the dynamics of this group of countries and the way they are dealing with energy and climate policy. Through the example of renewable electricity, it is easier to grab the “eastern pattern”.

The CEE Member States (11 countries out of the 28) are responsible for one fifth of the EU's CO2 emission. Significant delay of the green transition in CEE – as it stands now – would slow down the EU's pace and lower the chance of meeting our Paris commitment. Will the EU use the tool provided in the form of NECP (national energy and climate plans) to give a new momentum to wind and sunlight in the Visegrad Group and beyond?

“Ambitious long-term strategies are central to achieving the Paris Agreement goals and preventing some of the worst impacts of climate change. The EU is committed to doing its part. For us, the question is not if but how and when we can make our society ready to do this. The clean energy transition will be key, and achieving our climate objectives will require contributions from every part of the economy – industry, business, farming and forestry – and from us all as individual citizens,” Miguel Arias Cañete, Commissioner for Climate Action and Energy, opened a stakeholder forum early July in Brussels discussing the EU’s vision for a modern, clean and competitive economy.

Mr Cañete’s words evaporate rather inconclusively in the thick air of the V4 capitals. Generally, we can describe these countries – Poland, Czech Republic, Slovakia and Hungary – as a bloc which has no ambition whatsoever in changing the old tradition of electricity generation dominated by the supply side approach. The slogan sounds like this: state shall build rather big capacities to make sure that the demand is satisfied. Entrepreneurial attitude, business-like approach is not quite welcome in the energy sector from the east of Elbe. These governments seemingly keep holding on to the old ideas of energy policy without much climate related ingredients or vision about the transition to green economy.

E3G has been studying the political economy of climate and energy in these countries recently, which gives a good overview and the opportunity of comparing the dynamics, finding similarities of the policy approaches. Based on this experience this article will provide a closer look at the development of renewable electricity generation as one of the major potential transformational driving force. One of the main fields what has been assessed over this exercise is the low carbon economy, which is generally weak and/or very much divided in all the countries concerned. At the same time the high carbon interest is very well expressed, the companies in question have good and historic connection to the state, as most of them are still state owned. They represent traditionally the establishment of the energy industry and as such still manage to lay the institutional, economic as well as legislative framework despite of EU values, rules and long-term targets.

Sad stories of wind and solar

Looking at the recent statements from the Visegrad Group, renewable energy is rarely mentioned. The only strong declaration on this matter is emphasising the importance of agriculture and underlines that the share of biomass should be maintained or even increased in the energy mix. The main bulk of renewable energy is still based on biomass. The practice of using wood and other agri-originated resources in most of these countries is questionable from sustainability point of view, and also from employment aspect (providing only quite low-key jobs, though for many people) etc. There is practically no mentioning or consideration towards solar and wind energy what would considerably change the whole electricity infrastructure and the structure of electricity mix. In practice, these technologies are artificially hold back, rather than supported by the policies.

Wind stops at the border of Austria, where the nameplate capacity of wind is over 3GW already, though the geography of the country doesn’t really favour this technology. On the other side of the border, Hungary has a bit more than 300MW. All of the licences for this wind parks were distributed back in 2006, and since then not a single permit has been issued and a recent change in regulation prohibits any new development. In Czech Republic, the installed wind capacity is similar - with a recent project barely exceeding 300MW - and generates a tiny portion of the consumed electricity. In Slovakia, wind is not even mentioned in official policy documents as a potential source, and there are only two little wind farms in the country. Poland has a vast wind potential both off- and on-shore due to its geographical position, and with its 5,8GW installed capacity Poland is the 7th in EU. Nevertheless, the dynamic development was broken in 2016 when the government introduced a similar spatial regulation as in Hungary and changed the economics considerably, which suggest the stagnation stays long as the political risk hovesr over the windy lands after this manoeuvre.

The solar development in V4 is different due to the attributes of technology and investment but shows some analogies. The Czechs were the pioneers in the region, generating a solar boom by a generous feed-in tariff in 2005 resulting in 2GW installed capacity up until now. A political scandal erupted in the meantime suggesting state capture, then blaming renewables for the increased electricity price. This was practically enough for the other countries in the region pointing fingers to this mistake and refraining themselves from supporting this technology. In the three other countries practically no solar electricity generation is happening, though in Hungary at the moment around 1GW worth of new licences has been distributed over the previous years, which are meant to be built in the coming months. Both Poland and Slovakia claim problems with the grid to accommodate this distributed energy and the Slovak regulator oblige any new producers to consume at least 90% of the generated electricity on the spot.

Obviously, these countries have much more renewable electricity potential and these are generally more viable economically than the conventional options. In terms of wind clearly Poland is in the best position and according to experts it could easily double the nameplate capacity to 12GW, while the three other countries could develop their wind capacity up to 1-3 GW. In case of solar, Hungary has the best conditions and could grow its installed capacity easily up to 3GW, while the three northern countries could increase this source of energy in their mix significantly depending on their size and regulation.

When one looks at the energy security issue of these countries, the dependence on coal and/or other external energy sources (including nuclear fuel), the additional long term macro-economic benefits of relying more on in-country sources which are available in such great volume, the logical conclusion would be supporting these developments. Support in this context doesn't involve public money, but means rather stable legislative and institutional framework, political will; providing level playing field to these technologies. The risks attached to wind and solar (technology and financial risk) are significantly lower now than they were 5 years or a decade ago. These are stable and tested technologies already with significant international experience of integration.

Why is the green transition not happening yet then? What would be needed to exploit this potential and realise the safe basis for future energy generation?

Physical infrastructure – the grid – is one of the issues. Indeed, the network needs to be developed accordingly, which is more or less financed by the new renewable projects. Engineers are more than capable to provide solution to any of these problems, if there is a clear verdict from the state (legislation, financial framework) dripping down to the distribution companies, which are ultimately responsible for this problem to solve.

As it is obvious from the above description, in these countries the legislation is hostile to renewable electricity but quite unstable at the same time. From one day to the next, the parliaments, governments create a totally new legal situation, which is unacceptable for any decent investor. At the moment, in all four countries wind and solar are administratively blocked and there is no way to obtain new permits for sizable project neither for solar, nor for wind. This is very likely the outcome of the activity of the incumbent companies, which are holding on to their old technologies and would like to keep their share at any “constitutional” cost in the energy business. At the same time, the decision makers still believe in huge infrastructure projects providing greater amount of energy rather than low condensed, distributed electricity. Banks are reluctant to finance even the good projects fearing that a new decision diminishes the business plan and even though they are willing to commit the capital, the higher interest rate will create competition disadvantage compared to investing in Western Europe. Due to these circumstances – low capacity, low profitability, unstable regulation etc. – the advocacy potential of renewable interest declined significantly and by now there is only a dozen paid professionals who would be working in the Visegrad Group on influencing policy.

Energy efficiency – not good for politicians?

Looking at the demand side, one can generally conclude that energy efficiency is not making a fast rollout in this region either, in spite of the significant increase of EU funds channelled into this sector. The bulk of the potential lays in the housing stock (insulating walls, upgrading heating systems and replacing windows), which is considered by politicians either the duty of the home owners or a quite complicated way of making the voters happy. On the contrary, keeping the utility tariff low is a much more rewarding method of gaining popularity. Again, decision makers and politicians are not keen on doing their homework in designing the appropriate schemes, institutional restructuring, connecting commercial bank loans to grants what would be the precondition of wise and effective distribution of this source of money. Among other reasons, experts of this field will say that the opportunity of stealing (corruption) from upgrading the energy performance of the household sector is low and complicated compared to other infrastructure mega-projects. Renewable electricity generation therefore is a very vital field of greening the energy sector and lowering the overall emission of this region.

After all, what would be the possible engines of the needed change? Practically the European Union is the only active and forceful agent at the moment pushing the development of new renewable energy/electricity generation. The question is what room remained for the EU institutions for insisting and advocating. National sovereignty is always there for these governments to parry and call for protecting the choice of energy sources on the member state level. Infringement would be the next logical response. But are these countries afraid of the sanctions, penalties they need to pay in case of non-compliance when they fail to reach the targets? It’s doubtful.

Thus, the question is whether the European Commission would use the opportunity provided by the national energy and climate plans (NECP) due at the end of this year to execute a thorough assessment and keep these governments accountable to their earlier commitment as well as force them to show hospitality to the green electricity at least to the extent of their historical favourites: coal and nuclear.