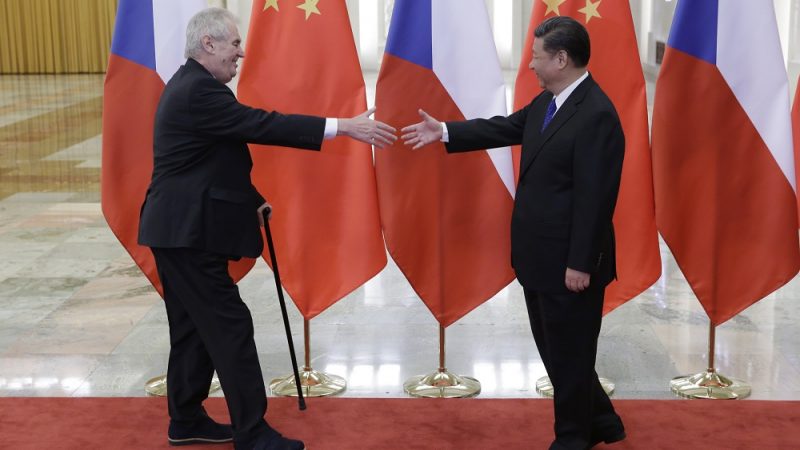 “…touched by Beijing’s outspoken geopolitical interest in the region and tempted by the opportunity to use China as leverage against Brussels, Central and Eastern European countries failed to consider that they could make good use of some leverage against China as well. If CEE countries might be able to overcome their internal divisions and their innate passivity within the 16+1 cooperation dominated by Chinese initiatives, their foreign policy toolkit could enable them to reach better deals with China, and constrain Beijing in exploiting them at the expense of European foreign policy,” writes Dániel Hegedüs.

“…touched by Beijing’s outspoken geopolitical interest in the region and tempted by the opportunity to use China as leverage against Brussels, Central and Eastern European countries failed to consider that they could make good use of some leverage against China as well. If CEE countries might be able to overcome their internal divisions and their innate passivity within the 16+1 cooperation dominated by Chinese initiatives, their foreign policy toolkit could enable them to reach better deals with China, and constrain Beijing in exploiting them at the expense of European foreign policy,” writes Dániel Hegedüs.

Dániel Hegedűs is a political scientist and an analyst at German Marshall Fund.

The so called “16+1 cooperation” between China and 16 Central and Eastern European countries – some of them EU members, others only candidates or aspirants of membership – was established in 2012. During the past six years, 16+1 evolved to the European bridgehead of China’s grand strategy project “One Belt, One Road” (OBOR), enhancing connectivity by investment in transportation infrastructure both in the broader Eurasian region, and between the Chinese and European geo-economic spaces.

Unsurprisingly, the initiative raised significant concerns from the very beginning and in July 2018, after the 7th summit of the participating head of states and governments this time in Sofia, Bulgaria, 16+1 cooperation still remained far from being undisputed in several Western European capitals.

Back in 2012, the launch of 16+1 unavoidably raised certain suspicion in the European Union, as it established China as a geopolitical player in a region which was either part of the EU, or was considered as its imminent neighbourhood, where European influence is exercised in a nearly uncontested way by enlargement conditionality. Nevertheless, the initial suspicion that China might use the cooperation platform to seed division among EU Member States in strategic terms never materialized. Just the contrary, with Beijing’s efforts genuinely concentrated on the development of interconnectivity in the CEE region, the advance of the strategic cooperation between China and the European Union, and actually the partners’ shared interest in keeping and stabilizing the free trade based global order against the unpredictable and destructive behaviour of an increasingly rampant U.S. administration, all these developments during the past years shed a more positive light on the 16+1 cooperation too.

In contrast, the involved East-Central-European EU member states have always argued that the 16+1 shall be considered as part of the global opening of their economies, making them less dependent from the crisis hit European markets shrinking in the first years after 2008. Furthermore, supporters of the Chinese engagement in the region in Warsaw and Budapest always underlined that the share of the trade with China and the level of Chinese foreign direct investments (FDI) is considerably higher in the case of most Western EU Member States, than among the East-Central-European ones. Against this backdrop, Central and Eastern European politicians and diplomats often dismissed Western concerns with the argument that CEE countries only intend to harvest the fruits of the economic cooperation with China as much as Western countries do. Respectively, the 16+1 cooperation might serve first and foremost as a political vehicle to foster that effort.

Nevertheless as tempting this fruit might have appeared, as far has it been from being a low-hanging one. Until now, it is fair to say that 16+1 failed to fulfil the economic expectations of the participating CEE countries, while in certain cases Beijing did use its leverage over certain East-Central-European EU member states to sow discord within the EU.

Concerning the economic dimension, China has always been overpromising, but underperforming in the Central and Eastern European region. Trade between China and the CEE countries showed significant increase in percentage over the past years, but its volume remained rather limited. In the case of Poland, the country maintaining the most intensive trade relationship with the Asian superpower among the 16 Central and Eastern European Countries, the trade with China barely accounted for 1 percent of the total Polish export, but nearly reached 12 percent of the total Polish import in the first three quarters of 2017.

These figures unmistakably show the bitter pill of trade relations with China: the high trade imbalance and deficit of the CEE countries, not exclusively caused, but definitely exacerbated by Beijing’s regulatory market limitations resulting in the lack of proper access for CEE companies to the Chinese market. For the most CEE countries China is definitely not among the ten most important export partners, but Beijing enjoys a firm position in the import rankings. Against this backdrop, the increase in the China-CEE trade exchange hardly allowed the CEE countries to make their export less dependent from the time to time ailing European market, but the rise in their imports and their growing trade deficit undoubtedly resulted in an increased leverage of Beijing over them.

Nonetheless, the situation is even gloomier with regard to the Chinese foreign direct investment in Central and Eastern Europe. Hungary, the country that attracted the most remarkable amount of Chinese capital in the region, counted in 2016 a Chinese FDI stock of barely 254 million Euro. Parallel to that, the Japanese and South Korean FDI stock in the country totalled 838 and 1,447 million Euro respectively. The Chinese FDI in the significantly bigger Polish economy has only been 123 million Euro in 2016. Japanese and South Korean FDI in the CEE region outclass Chinese investments several times, without the political challenges associated with the Chinese efforts. The perception of Beijing’s global leadership role and its demonstrated political interest in the region apparently overshadows the hard economic facts, when CEE countries consider their approach toward partners and investors from the Far East.

Considering the facts and figures mentioned above, one could conclude that there is plenty room for improvement in the China-CEE economic relations. However, Chinese economic expansion, especially FDI inflow, has hard limits in the CEE region. Chinese acquisitions in Western Europe are first and foremost motivated by the desire of purchasing promising technologies too that can be used in the modernization of the Chinese economy. Of course, this motivation can be hardly fulfilled in the not necessarily innovation based CEE economies that are in the most cases caught in the middle income trap. Furthermore, the general comparative advantages of CEE economies attracting the most foreign investment, low labour cost by comparatively high labour force education standards, provide hardly any advantage vis-á-vis China, an economy with incomparably bigger potentials, still lower labour costs, and disciplined workforce. These variables explain the rarity of Chinese green field investments, where Japanese and South Korean companies excelled. The Chinese investment model of OBOR is aiming at the utilization of Chinese overcapacities, not their reduction. Chinese companies are not keen to transfer production capacities in the CEE region. Therefore their acquisitions mostly target industrial assets that already have viable production capacities and market access.

In contrast to the palpable concerns with regard to the Chinese economic presence in Central and Eastern Europe, CEE countries (but also other EU members, like Greece) have demonstrated a considerable lack of political resilience in the past years. Of course, Chinese attempts of political influence are not as destructive as their Russian counterparts, but are definitely not harmless either. In contrast to Moscow, Beijing is not interested of the destabilization of its European partners and does not intervene in their domestic affairs by the support of radical fringe parties and political extremists. However, Beijing puts significant political leverage on the CEE countries and certain other EU member states, and definitely exploits them for the sake of its own foreign policy interest, as it was obviously demonstrated by Hungary, Greece and Croatia with regard to the South China Sea Arbitration, and by Greece and Hungary by blocking an EU statement in the UN being critical towards the human rights record of China. Thus Beijing certainly undermines the EU’s common foreign and security policy.

The motivation behind the above mentioned disruptive behaviour of certain Central European EU member states is certainly a free rider and underdog mentality in parts of their political classes. Politicians from these states often do not consider their own country being part of a “Western core”, where from a global perspective they definitely belong, and do not perceive the European and international institutions shaped by the Western liberal order as their owns. In the eyes of several CEE governments, China is a useful partner to counterbalance and put some leverage on the EU, and to strengthen their bargaining positions vis-á-vis Brussels, for example during the negotiation of the new multiannual financial framework (MFF) of the EU.

Bearing all these considerations in mind, the 16+1 cooperation can fairly be considered a divisive, and not a cohesive platform from the perspective of both the EU and the CEE countries involved in it. Beijing has effectively used the principle divide et impera within the 16+1, creating a political-economic environment where CEE countries compete for China’s grace. Interestingly, touched by Beijing’s outspoken geopolitical interest in the region and tempted by the opportunity to use China as leverage against Brussels, CEE countries failed to consider that they could make good use of some leverage against China as well.

If CEE countries might be able to overcome their internal divisions and their innate passivity within the 16+1 dominated by Chinese initiatives, their foreign policy toolkit could enable them to reach better deals with China, and constrain Beijing in exploiting them at the expense of European foreign policy.

Countries involved in the V4 or V4+ formats, or in an ideal case all 16 CEE countries should coordinate their positions with regard to trade imbalance, market access, or Chinese underperformance at the FDI field, and should speak at one voice to Beijing, enabling them to punch above their weights. Furthermore, diplomatic formats like the V4+Japan could permit to reach out to Japan and mutatis mutandis to South Korea, and establish new political framings, perhaps also institutional settings for an enhanced political-economic cooperation. Such move could contribute to the relativization of the narration of Chinese exceptionalism in the Central and Eastern European region and reposite China-CEE cooperation in a new, competitive environment where Chinese performance counts. Last but not least it could deepen the integration of CEE companies in the global value chains of Japanese and South Korean conglomerates, and forge closer ties with political-economic players, which – in strong contrast to China – underpromise, but overperform.