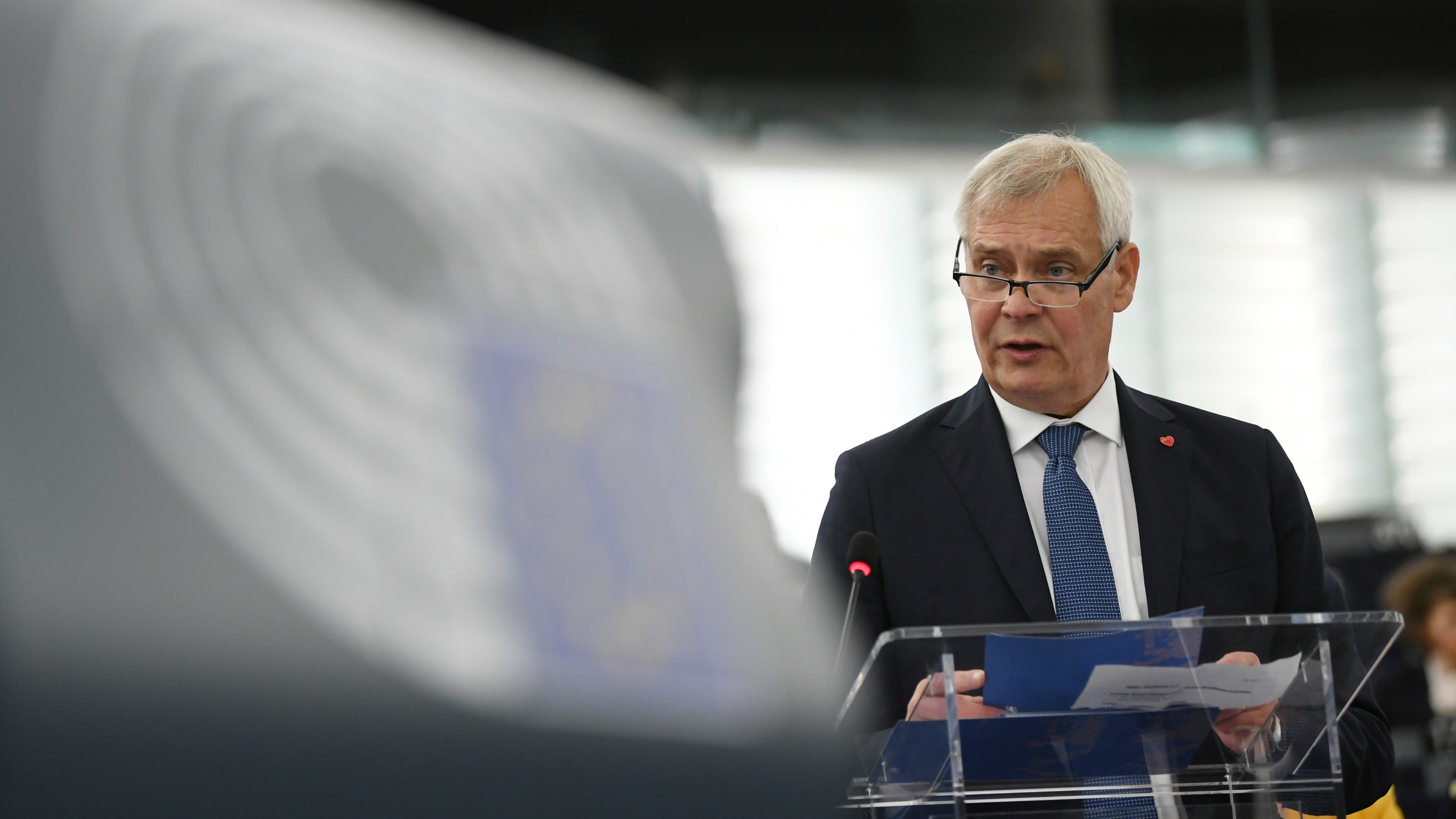 Finnish Ambassador: The biggest differences with V4 have been climate and migration issues

Finish presidency at the Council of the EU has started on July 1, ambassador of Republic of Finland to Poland claims Helsinki prepared ambitious program despite the institutions are setting up its leadership. Collaboration with V4 shall be sought at security in the Baltic Sea region and in Central-Eastern Europe, as well as in infrastructure, JUHA OTTMAN says.

We would like to start with the priorities for your presidency in the European Council. During your first presidency in 1999, you managed to introduce the Northern dimension to the EU agenda. Do you have a similarly ambitious goal this year and a capacity to deliver it?

After the European Parliament elections, the European Union is in a transitional phase before the appointment of the new European Commission. We started where Romanian presidency ended, but there is no new legislation on the table.

However, Finland’s presidency program is very ambitious especially when it comes to mitigating climate change: this is why our slogan is “Sustainable Europe - Sustainable Future”. There is a lot of work ahead of us, but I am quite optimistic. It would be important to agree on the target of carbon neutrality by 2050 still by the end of this year. Because of the transitional phase, the EU is somewhat more paralysed than during a so called normal EU presidency. That is why our chances to accomplish our objectives may be more limited that in our previous presidencies in 1999 or 2006.

We have also other big challenges ahead us. We inherited negotiations on the EU’s Multiannual Financial Framework (MFF), which were discussed by the heads of state in the June European Council meeting. The Finnish presidency is now expected to come up with concrete figures for different sectors to be financed. Despite the divisions among the EU member states, our aim is to have an agreement by the end of the year. However, this is to somewhat overshadowed by uncertainties such as Brexit, elections in member states, etc.

So generally, you expect limited results…

In general, the level of ambition of Finland’s presidency is still very high. We expect progress in deepening the single market, security & defence cooperation and pushing forward an ambitious trade agenda despite the fact that the presidency has a limited role in trade issues. The EU initiated the EU-Mercosur free trade agreement even though there are some concerns by some member states on effects on agricultural production. Other issues we want to move forward include EU-China and EU-US relationships. It would be also important to continue trade talks with the US as a follow-up to Juncker-Trump meeting last year.

And what about the rule of law? Do you intend to focus on this area as well?

The rule of law is one of the priorities of Finland’s EU presidency. Dialogue on the rule of law issues within the EU is important also for the sake of the credibility of the EU. For example in the context of the EU’s enlargement or neighbourhood policies, it is important to show that our own systems function well.

We are expecting the second communication on the rule of law from the European Commission in July. Even though there is no EU acquis in this field, we know what issues are important in this context: the independence and professionalism of the judiciary, fundamental rights, including the freedom of expression and media. The assessment by the Commission is important because we consider the EC as the guardian of the EU treaties, including the article 7. However, we are fully aware that member states like Poland and Hungary have different views on the competences of the EU institutions in this regard.

We aim at continuing discussions later in the autumn on how to strengthen the rule of law toolbox and how to create cooperation in different sectors. There is also a link to the negotiations on the Multiannual Financial Framework, as the Commission’s current proposal sees the respect of rule of law as a precondition to good EU spending.

So as far as we understand, you will try to play the role of a facilitator in this issue during your presidency?

Yes, as a presidency we put our national agenda on the side, and work as an honest broker aiming at facilitating compromises and bringing things forward.

The topic of conditionality brings us to the Visegrad Group. Where do you see the biggest potential for Finland to cooperate with V4 and what issues are the most difficult in mutual relations?

Visegrad countries (V4) is one alliance within the EU. Like-minded countries have a tradition to collaborate on various topics with each other, which is only natural. Finland cooperates with the V4 in the framework of Nordic-Baltic cooperation and we organize regular meetings at the level of foreign ministers. The agenda covers EU, but also security and economy related matters. We see a lot of room for collaboration with V4 when we talk about security in the Baltic Sea region or in Central-Eastern Europe. Infrastructure is another important topic.

Where we have had the biggest differences so far are climate and migration issues, notably the issue of relocation and resettlement of asylum seekers within the EU and from third countries. But we also agree on a number of issues such as enhancing the EU’s border control and protection, readmission and tackling the root causes of migration in third countries. On climate issues, Finland is pushing forward a substantially more ambitious goal than the V4 countries.

All the V4 states also belong to the Three Seas Initiative. How does Finland perceive this project?

The 3-Seas-Initiative is a platform of regional cooperation for Central and Eastern European countries when it comes to infrastructure investments in the fields of energy, transportation and digitalization. It is good that also the European Commission is actively involved in the initiative together with Germany and the United States, because at some point there were suspicions about the actual aim of this initiative.

Every initiative that enhances regional collaboration and improves coordination among countries is good. The next Summit of Three Seas Initiative is taking place in Tallinn in June 2020. I understand that Finland would be welcome to take part in the business forum organized in connection with the Summit.

But is it not true that Finland perceives this initiative as the one that undermines the European unity?

As I said earlier, perhaps at the beginning there were suspicions that the initiative was a kind of counteraction against the founding EU member states or a group of friends of cohesion. The perception has now changed. Now that the European Commission and Germany are more involved it very clear that the aim is to enhance collaboration within the EU and not to divide it. We view this very positively.

And what about the enlargement of the EU in the Western Balkans? Poland and other V4 countries strongly support this initiative, but this is not a common position of the EU. Will Finland cooperate with countries like France, the Netherlands or Denmark who are – for various reasons - opposed to the enlargement?

Finland has traditionally supported enlargement and one of the accomplishments during our 2006 Presidency was the European Council conclusions on enlargement in December 2006. Finland’s recently appointed Foreign Minister Pekka Haavisto has publicly expressed Finland’s strong support to the EU’s enlargement policy. He also attended the Foreign Ministers’ meeting with the Western Balkans countries under the Berlin Process Summit in Poznan early July. We are thankful for Poland for the initiative to invite the Finnish presidency to the Summit.

However, we believe that candidate counties have to fulfil the criteria for EU membership and progress towards the EU based on their individual merits. We support the Commission's proposal to open the accession negotiations with North Macedonia and Albania. But, we are also fully aware of the fact that Finland has to address the concerns of more sceptical member states before any decisions are taken in the Council in October.

So, is it safe to say that in the first place you support the accession of the countries that are more advanced in the reforms, North Macedonia being an example here, and others only when they catch up?

And finally, Russia. The EU regularly renews sanctions on Moscow. Finland supports this kind of policy, but do you think that in the near future EU relations with Russia can improve, and if so, is it the role of Finland to facilitate this kind of improvement? In other words, is there a space for opening with Russia, and if so, where Finland stands on this?

Any progress depends on Russia itself and in particular on how Russia acts in the context of Ukraine. We are not expecting any major changes regarding the EU-Russia relations. Currently, there are no conditions to relax the EU’s sanctions on Russia. Nonetheless, it is important to keep contacts and sustain the selective dialogue when it provides value added for the EU. It is important that also EU institutions are engaging in selective dialogue with Russia, not only the member states.

To what extent your position is influenced by Finland’s historical ties with Russia?

Naturally, Finland’s relationship with Russia is influenced by both history and geography. We have 1300 km of common border with Russia, which is also the second longest EU’s external boarder. Despite the sanctions, Russia is still an important trading partner and Finland is the biggest foreign investor in Russia per capita. Some sectors, such as dairy and retail, have suffered from the sanctions, but many companies are also investing in Russia. Russians are the biggest tourist group to Finland and we have very intensive people-to-people contacts with Russia.

We are very pragmatic with our relations with our neighbour, but we are not naïve either. We are aware of the challenges what comes to disinformation, hybrid or cyber security. Therefore, enhancing the EU’s resilience in these issues is an important priority for us.

Juha Ottman has been an ambassador of Republic of Finland to Poland since 2018.