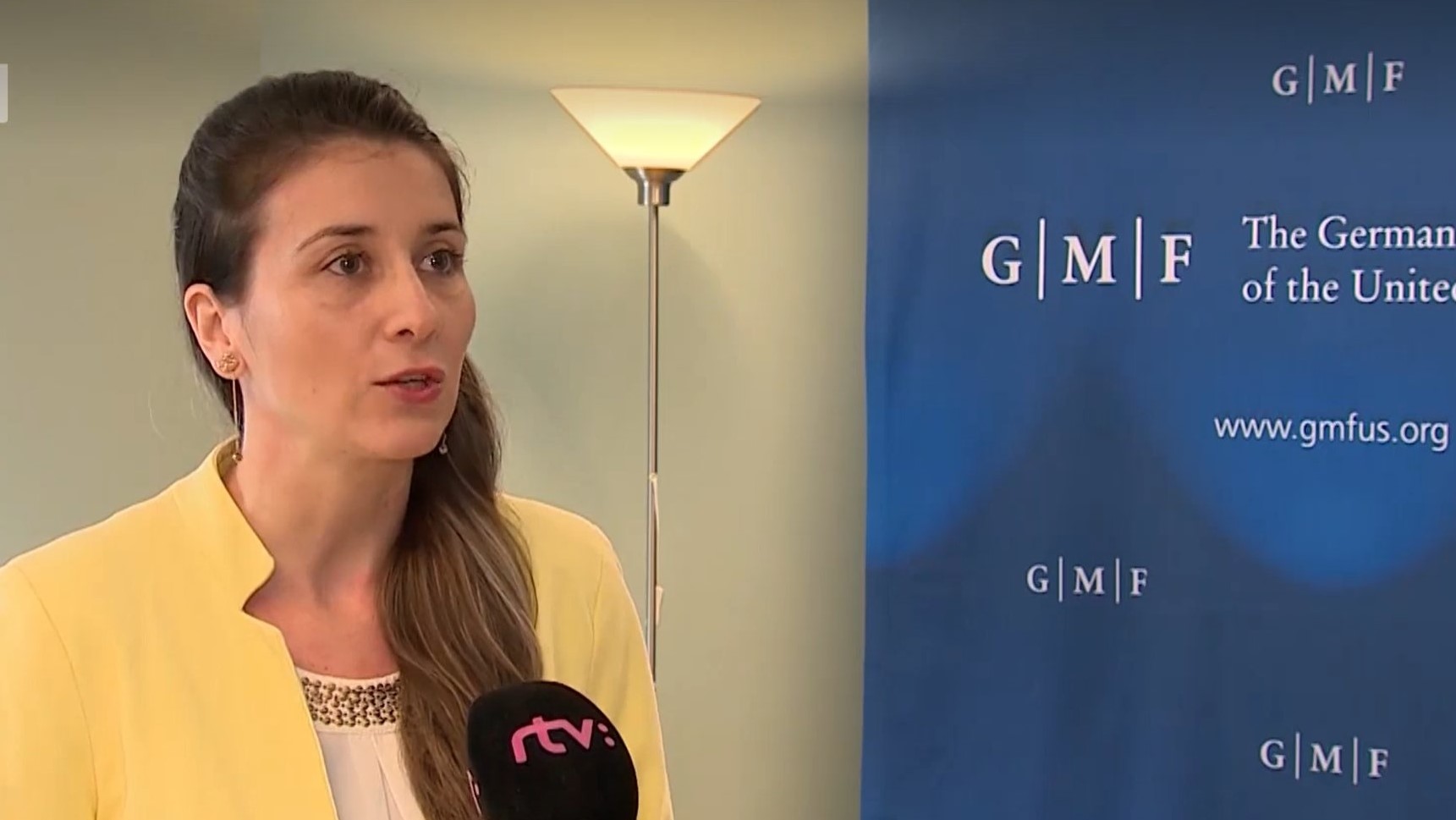 Disinformation during pandemic: How can the Visegrad countries combat it successfully?

Just as the other EU countries, the Visegrad states are endangered by the amplification of manipulated information and the pandemic has only contributed to the problem. Combatting disinformation is a whole society effort that requires action through various channels, states Naďa Kovalčíková from German Marshall Fund Brussels office in an interview with EURACTIV.pl.

What can be said about disinformation in Europe in the times of the COVID-19 pandemic? Can we observe any specific changes in the nature of this phenomenon? And how do authoritarian countries strive to use the pandemic for making propaganda?

I think the current public health crisis has provided fertile ground for the deployment of manipulated information. The COVID-19 pandemic has been a period full of uncertainty and doubts in society. Such circumstances tend to lead to fostering manipulation of narratives by malign actors who want to exploit this uncertainty.

Russia and China, as well as Iran to certain extent, used the COVID-19 crisis as an opportunity to interfere into democratic discourse and to present themselves as internationally responsible actors, while at the same time undermining democracy's capacity to tackle the pandemic effectively.

They do it through spreading manipulated information about the origin of the virus, about the capacity of democracies to tackle the pandemic, as well as by fueling tensions between certain countries, partners, allies - even between EU and NATO member states - to further drive a wedge during already quite a challenging period.

You mentioned Russian propaganda. Does this problem embrace the whole continent or is it restricted to some areas, perhaps mostly the Baltic states or mainly our region, the Visegrad Group? Also, what topics does the Russian disinformation usually cover, apart from the pandemic?

However, by now a lot of countries have realized that disinformation and amplification of disinformation by Russia is not necessarily limited to concrete countries. The aim is to drive a wedge between different countries or groups of people.

Currently, the COVID-19 is basically the most present topic, and everything seems somehow linked to the pandemic, be it anti-vaccination information, or anti-government content in different countries that is aimed at fueling tensions against authorities. But there  disinformation from Russia also before, for example, about NATO, to portray it as undermining Russia's interests, especially in certain regions.

Also, other historical topics have been used which are quite tailored to local audiences, to certain countries. They vary from immigration-related issues, or the alliances, to the local issues within the countries, also around the elections, for example. So there is a great variety of topics that disinformation covers, and it may be well-tailored or targeted around concrete events in the countries.

How can the governments and also non-governmental bodies combat Russian disinformation?

Countering disinformation requires a whole of society effort. Nongovernmental organizations, civil society, as well as other actors such as the media, the private sector, governments and international organizations- they all need to combine their efforts to ensure effective outcomes.

NGOs play a critical role in raising awareness of disinformation and the harmful impact it has, the potential consequences. They should provide concrete examples that people can relate to and will help them recognize and detect disinformation when they encounter it.

Also, civil society organizations may launch their own training initiatives and help, for example, to increase media or digital literacy. They may raise awareness or cooperate with the media on both delivering information and conducting fact-checking. In some countries, all of these efforts have been on the rise, but they still need to be enhanced.

Combating disinformation, regardless of where it's coming from, requires building certain awareness, but also the skills for the citizens to be able to recognize it. There are efforts to deliberately misinform people for different reasons, and manipulate various narratives. Acknowledging that disinformation is being spread is a first step to counter it successfully.

It is also important to know how the spread of disinformation actually functions and build resilience towards it. People need to know that messages that trigger, for example, strong emotions can aim   people's perception and understanding of concrete issues. So if the citizens come across a piece of information that is clearly trying to trigger strong emotions, they should be more cautious about that and critically assess it.

They should also verify sources. Credible information tends to be shared from verifiable and a variety of sources. It's important to be cautious and check from various sources to verify the information.

We live in a very fast-paced environment, digital environment. People need to be patient when they receive and consume information or want to share it, especially if it seems to be weird or outraging.

Instead, take a moment, check the message, think about it and only share it if it is credible. It does not necessarily have to support their preconceptions. Very often people share manipulated information if it agrees with their views on the concrete topic. So it's important to distance yourself a little bit.

Now, I would like to return to the governments and their actions. How to build an effective control disinformation system, what should it be based on and what tools do we need to make it really effective? Do you see any mistakes that are being done in this field?

As far as we preserve democratic principles of freedom of speech and freedom of expression, we will probably continue to face manipulation in the information sphere. But what can we do more effectively, especially when it comes to the division of responsibilities and roles? Social media companies should  decrease the amplification of manipulated information and thus decrease the reach and harmful effects.

Also, certain countries have already adopted some good practices and applied certain tools like, for example, pro-active communication from authorities, from authoritative voices and various experts, giving them space to share their expertise, their knowledge, and accurate information in a regular manner. This helps fill the information vacuum, which otherwise tends to be exploited by malign actors.

Another example of a good practice is engaging different officials and creating cross-ministerial task forces, as can be observed in Finland, or the Netherlands. That is a good step forward in countering disinformation. A more holistic approach to disinformation is needed across various government bodies and sectors of the society.

Also, as we are part of different international such as the EU or NATO, it is very important to burst information bubbles and allow for the rise of a European public sphere, where issues are more effectively communicated to the citizens of all the EU countries in a geographically equitable way and in a way that speaks to them - to show them how European issues are also their issues and therefore matter for them and deserve close attention. It will be then more difficult to drive wedges also between the member states of the EU and of other organizations.

These are some of the tools that can be used and explored further and will contribute to mitigating certain missteps or mistakes that have been done. Moreover, the support of independent and investigative journalism is very important.

What lessons can the Visegrad Group learn from the pandemic when it comes to the need to combat this information? What can it do to ensure that their own citizens, the citizens of the Visegrad countries, can enjoy information from credible sources in these uncertain times?

European member states have a great access and opportunity to monitor and potentially adopt good practices from other member states and partners. We have learned during this crisis, but also during other crises, that it is very important to use reliable sources, to have different reliable sources of information and quality journalism, so people can consume quality information.

Protecting and supporting independent investigative journalism and local journalism as well as media organizations plays a critical role for ensuring that citizens receive credible information in a regular way.

All the countries have the responsibility to protect and support quality journalism, provide financial support, and have independent fact-checking bodies, but also make sure that there is a variety of sources of information to engage the citizens in the democratic discourse.

It must also be ensured that the information is shared by authorities in a transparent manner. It is very important for the Visegrad countries and all the other member states of the EU to encourage quality media landscape.

At the same time, it is also crucial to make a good use of the other tools that we have discussed and make sure that all the actors play a role in the effort in either countering disinformation or amplifying credible information. Some issues may be addressed more effectively with initiatives at the EU level, such as through the Code of Practice on Disinformation or other proposals.

In your opinion, is it possible to eliminate the phenomenon of disinformation at all, or perhaps we should rather focus on mitigating its most harmful consequences?

My last question will concern security and defence, as we know that you are an expert in this area. Do you see any field for cooperation for the Visegrad countries on defence?

The Visegrad countries are also members of NATO, so they naturally do already cooperate on security and defence issues in this bigger Alliance. They also participate in the defence-related efforts of the European Union.

So I think the Visegrad countries need to continue to be active members of these two organisations and reliable partners for each other and other allies. They need to participate in the efforts of these organisations  to effectively combat various security threats.