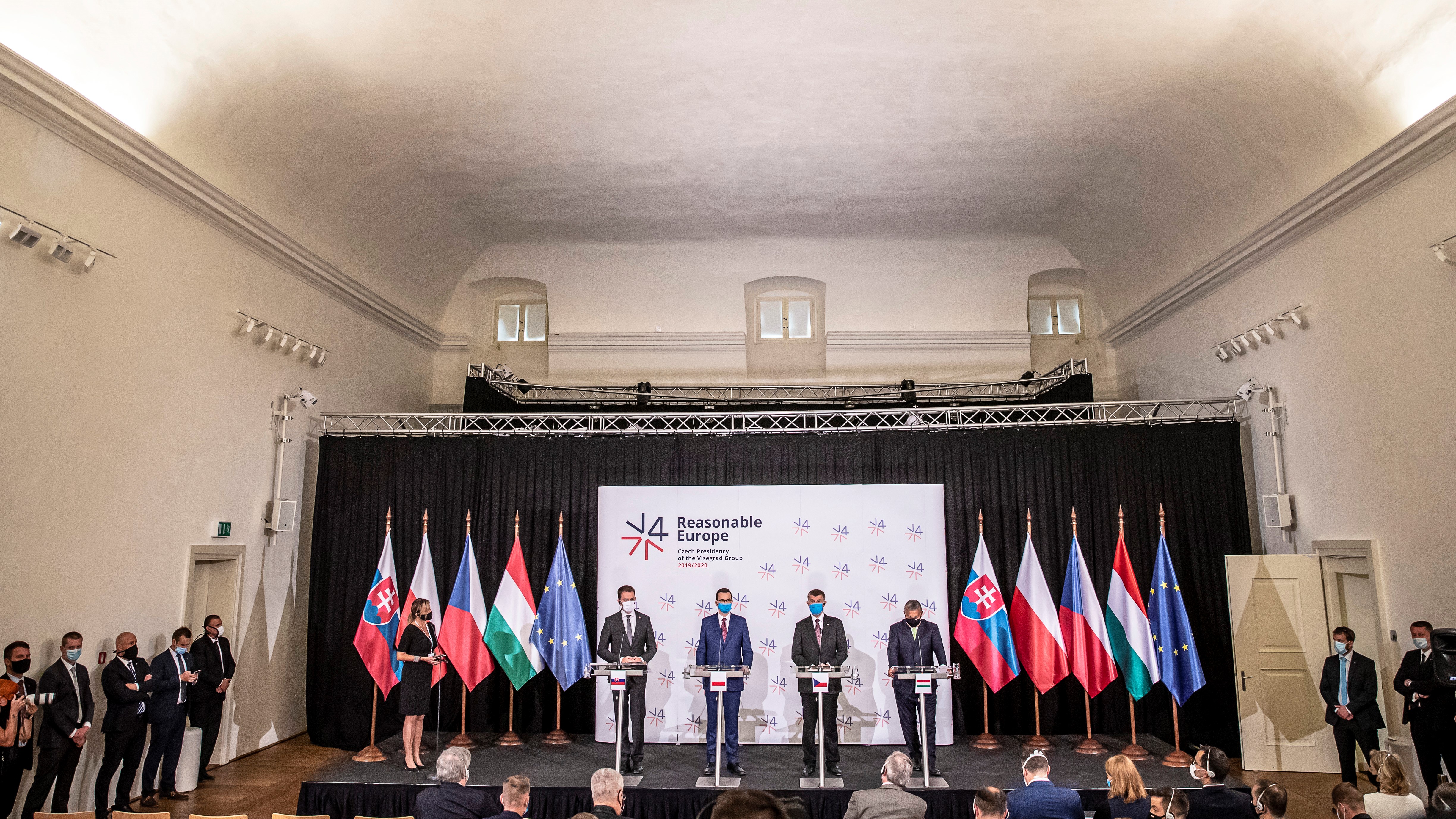 After Covid, a new, sustainable economic model is needed

Visegrad governments should use the opportunity of the crisis for structural changes and reforms in the labour market, education and healthcare. They should also look beyond the GDP and embrace green transformation.

The Covid19 pandemic should be understood as the “great accelerator of changes”, one that revealed strong sides of our economies and society, but also their weaknesses, says Danuše Nerudová, rector of the Mendel University in Brno, Czech Republic.

Four experts from V4 countries debated the biggest “winners and losers” of the pandemic during an online event in their respective countries as well as the lessons learned for the recovery ahead.

Since Covid19 is not going to disappear in the foreseeable future, the main task going forward, the rector believes, is to come up with a new economic model,. “Thinking that after Covid we will get the normal life back seems to be a fairy tale,” Nerudová claims.

The longstanding fixation on GDP growth and cheap labour must be replaced by concentrating on sustainability across all policies, she argues. Lost is also the false feeling of security. “I think this is good because it changes our behaviour and way of living,” Nerudová says adding that the issues of food or health security need to become more prominent.

To her, trust in government, in society and in science is extremely important in the fight with Covid19 and so is the international cooperation within EU and NATO that offers, for instance, better access to vaccination. Nerudová believes the crisis can be approached as an opportunity via smart investments with the help to the EU budget and the green deal.

Head of the Strategic Team at the Polish Economic Institute Paweł Śliwowski explains that from the macroeconomic point of view, Poland is not experiencing a profound crisis but rather a slowdown. Poland´s GDP fell in 2020 for the first time in the 30 years period, but provided that the vaccination process will go smoothly, the prognosis predicts return to growth in 2021.

Similarly to other countries, hotels, catering and restauration services, entertainment sector as well as the airlines are among the most struck sectors. However, unlike in the southern EU countries, these sectors are not key for the structure of the Polish economy.

Definite winner, according to Śliwowski, is the Polish export, which experienced an unexpectable growth. While people in trading partner countries restricted service consumption they switched to goods consumption, things like furniture and households appliances or electrics produced in Poland.

Ágota Scharle from the Budapest Institute sees the Hungarian “losers” of the current situation mainly among smaller domestic-owned firms in services. The researcher points out the problem with the availability of data. “We only have aggregate statistics and some micro statistics. They do not capture well what is going on,” she says. While the aggregate employment numbers show a fall of around 3 percentage points during the first phase of the pandemic, in reality, after adjusting for the actual number of hours worked, the fall is twice as big, around 6 percentage points. “The reason for this is that 11 % of the workforce went on holidays in spring, when people usually do not go on holidays another 10 % went on shorter working hours or was fired,” Scharle explained.

From the macroeconomic point of view, Slovakia was not that hardly hit. Macroeconomic forecast was worse than the actual outcome of the 2020, says Miriama Letanovec Svetkovská, former director of the Implementation Unit of the Government Office.

She criticized the lack of predictability and high degree of improvisation in the Covid19 response on the part of the government. “This is also affecting the effectiveness of the measures which are implemented,” Letovanec believes.

Further, the crisis revealed three weak points. First one is the shortage of Slovak healthcare personnel, she argues. “Nobody was prepared for the pandemic, however, the problem of the shortage of personal was a problem very well know from 2010. This is what happens when no reforms are implemented in the time of growth.”

Second weak point exposed, according to Letovanec, is the much needed reform of the long-term care and the third one is the digital education. More than 52 thousand kinds were unable to connect to the distance learning process in Slovakia.

On the other hand, Letovanec sees the Slovak academia and Slovak scientists as the winners of the pandemic. “Even though Slovak research is very much underfinanced, our scientists from the Slovak Academy of Sciences were able to come up with unique Covid19 tests.

Following up on the issue of education, Ágota Scharle believes that the experience of parents who are faced with home-schooling of their children will result in increased positive awareness about the value of schooling and also the work of teachers in the general population.

“Parents suddenly understood how much is going on in schools and the high-level expertise that teachers should have to be able to perform their task. I think this might be lasting and there might be more pressure from the general public on the government to treat the teachers better, as this is a long standing problem in Hungary that teachers are underpaid, thus the quality of the stuff is not as high as it should be.”

Paweł Śliwowski points out the limits of digitalisation in the Polish economy and schooling. The ratio of employees who can do their work remotely is less than 40 %. Lacking indispensable digital competences are also a problem. “Digital economy index is low in all four countries. Poland is even behind the others V4 countries,” he says.

In education, he argues, rapid and total digitalisation is not something to wish for as the physical education has obvious benefits. “It is much more than the competence transmission. There are many deficits of remote learning. For example, schools provide free meals to some students and there is psychological work with some students. Schools also have great equalising role,” Śliwowski explains.

On a slightly different note, rector Danuše Nerudová sees greater digitalisation of university education as a huge opportunity for the universities in the V4 countries. More concretely, it makes it easier to incorporate foreign top experts into the learning process at much smaller costs.

“In this crisis it actually proved helpful because we had at least one level of government that was very close to the people and was ale to see the problems,“ says Agota Scharle.

“Municipalities took up a lot for what the government was not able to do in terms of education and some social interventions. The negative dimension was the lack of support from the central government which did not allocate more funds for them to do what they should be doing.”

In this context, Miariama Letovanec Svetkovská reminds that the first wave of mass antigen testing for Covid19 in Slovakia cases was successful only thanks to the work of local governments, when “they were the ones who did not received good guidance from the government but were able to secure material and personnel resources.”

What is the one thing the experts wish the post-pandemic recovery to address?

Miriama Letovanec wishes Slovakia moves beyond 4-year political cycle. “I would like to see more long-term strategy for Slovakia. Also, I wish that the national resilience and recovery plan that our government has sent to the European Commission would be more ambitious.”

Ágota Scharle would like to see the Hungarian government to set a minimum income scheme that is more generous than the current welfare benefits system. This scheme should be run by the local level rather than by the central government and “be combined with the capacities of NGOs and volunteer work which is a great asset during the crisis”.

Paweł Śliwowski advises Polish government to focus on structural reforms, for example  related to labour market, such as the taxation of work in the lower income groups or the way the state approaches the work with unemployed people. Green transformation should play a huge part in the recovery, the economist adds.

Danuše Nerudová accents the need to renew the trust without which it is not possible to restore the economy. She advocates for stable environment for the businesses and reduced the administrative burden. “There is an extreme opportunity in terms of EU money to address two reforms we have not been able to address for many years and that is the reform of taxation and  pension system in the Czech Republic.”